In an event called the Vanguard Choral Celebration, the three choirs will perform individually and together in the Michael A. Guido Theater at the Ford Community and Performing Arts Center, 15801 Michigan Ave. at Greenfield, Dearborn. 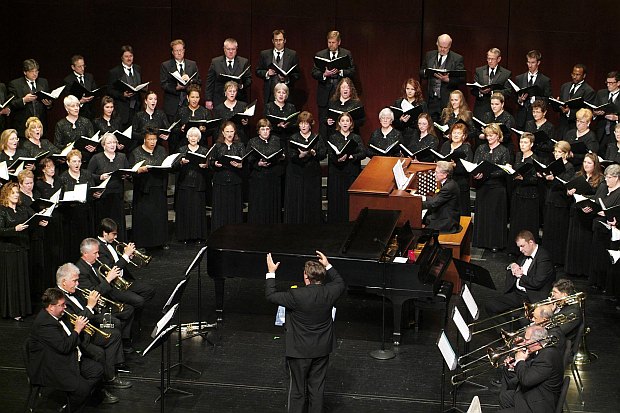 “It’s a great event that brings three exciting vocal groups to one stage, to perform for the audience, for each other, and with each other,” says G. Kevin Dewey, artistic director of Vanguard Voices and creator of the event, now in its third year.

“We have received raves for the past two years,” says Dewey. “Where else can you see three accomplished choirs in one evening for a great ticket price?” General admission tickets for the 80-minute concert are $5 and are available at the FCPAC box office or at the door.

Measure for Measure, a 75-voice male choir from Ypsilanti and under the direction of Steven Lorenz, will perform “All That Hath Life and Breath” by René Clausen, “Laudate Pueri” by Felix Mendelssohn, and arrangements of “Swansea Town” and “Joshua.” “I know our audience will be in for a treat with this group’s rich, deep sound,” Dewey says.

The Flint Festival Chorus, under the direction of Bradley Bloom, will perform “O Clap Your Hands” by John Rutter, “Saul” by Egil Hovland, and “Kyrie” from “Solemn Mass” by Louis Vierne.

“Vanguard Voices is looking forward to singing with Flint Festival Chorus once again,” says Dewey. The two choirs performed together in a 2001 performance of the Verdi Requiem with the Flint Symphony and a 2002 performance of Beethoven’s Ninth Symphony with the Dearborn Symphony.

The host choir will perform three pieces for double choir: “Nun Danket Alle Gott” by Johann Pachelbel, “We Beheld Once Again the Stars” by Z. Randall Stroope, and “Song of Exhaltation” by John Ness Beck.

“These three pieces will demonstrate the depth of the choir as well as its adaptability to widely varied compositional styles,” says Dewey. “Each piece has its complexities and each is fun to sing and to hear.”

The three choirs will combine on stage to perform Ascanio Trombetti’s “Misericordiae Tuae,” a polyphonic piece for double choir plus male choir, as the concert finale.

For additional information or to order tickets, call The Center box office at 313-943-2354