If the “best things in life are free,” the next best may be ideas that are born from people’s passions. For Daedra Surowiec, a Michigan mom of two young boys, it means creating a new business, Strawesome, that allows her to care for her children at home, use her artistic gifts, help the environment, and supplement the family’s income. 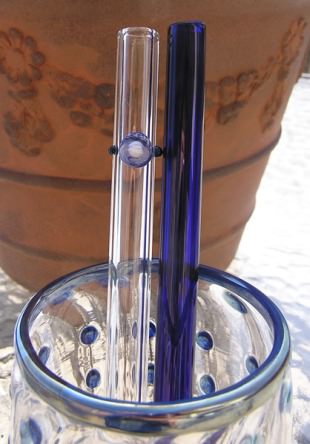 Surowiec launched Strawesome in March 2009 to sell reusable drinking straws that are both durable and stylish with creative, fun designs. Hand crafted by Surowiec from clear or colored borosilicate glass, each drinking straw is guaranteed against breakage. According to Surowiec, reasons for using glass straws, over plastic, include the reduced impact on landfills, and glass will not leach toxins into drinks.

A graduate of the University of Detroit Mercy with a bachelor degree in fine arts and architecture and with studies abroad in Italy, Surowiec worked in the corporate world for five years following
graduation. It was less fulfilling than she imagined.

Following her first son’s birth and her decision to start a home based business, Surowiec took a class in torch work at the Glass Academy in Dearborn and discovered that she could apply her artistic skills to create functional pieces of art with glass straws and develop a viable business. Surowiec admits to having a special advantage over other start-up businesses. Her husband Brian Surowiec, owner of Essential IT, is a developer of e-commerce Web sites including www.Strawesome.com.

Wide varieties of straws are available on the Web site and can be purchased individually or in sets. Selections include clear or colored glass, plain or custom decorated, and straight or bent in lengths from six to 10 inches. Among the most popular straws are those designed for drinking smoothies. Custom orders can be made for longer straws, corporate gifts, weddings and special events.

“I’ve received so many heartwarming stories from customers throughout the United States,” said Surowiec. “I’ve also learned that the straws have hidden benefits that I had never considered.”

Many of Strawesome’s customers are moms like Surowiec who are concerned about their children’s health and the environment. Several have reported that their kids will drink something they might not normally drink when they are given a decorative glass straw.

The straws also appeal to people who have sensitive teeth and have difficulty drinking cold beverages, and others who have suffered strokes or surgery that makes drinking through a straw much easier. While, some customers simply say that drinking through a glass straw makes the beverage taste better, even if it’s just water.

After launching Strawesome, Surowiec learned she was pregnant with the couple’s second son, who was born last December. She said, “Wouldn’t you know that it would be our biggest sales month ever.” Currently, all purchases are made online and shipped throughout North America and overseas.