Co-op Services Credit Union recently involved their members and employees to help raise money for Forgotten Harvest. The mission of Forgotten Harvest is to relieve hunger in the Detroit metropolitan community by rescuing surplus, prepared and perishable food and donating it to emergency food providers.

The credit union utilized a combination of social media, employee casual days and collection points in all of its eight branches to raise nearly $1,500 for Forgotten Harvest, which is recognized as the most efficient food rescue organization in the country. 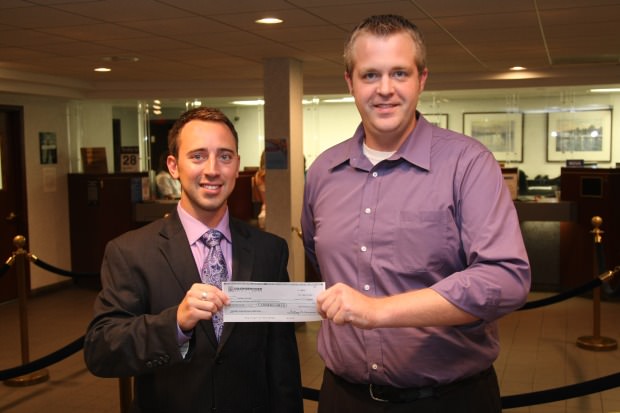 “Co-op Services donated $2 to Forgotten Harvest for each person who became a Facebook fan of ours in June,” said Bryan Feldpausch, the credit union’s marketing coordinator. “Each $2 donation provides at least 10 meals to people in need.”

Co-op Services also welcomed donations from members, employees and others who understand the tremendous need in the local community. It is estimated that the total amount raised will provide more than 7,500 meals.

“We are very grateful to have partners like Co-op Services that enable us to fulfill our mission,” said Peter Fezzey, director of major gifts and strategic relationships for Forgotten Harvest. “This year, thanks to increased donations of food and money, we’ve been able to deliver more than 19.4 million pounds of food to 158 emergency providers throughout metro Detroit, a 56 percent increase over last year. Still, hunger is the number one issue in our community.”

The statistics of hunger are staggering. According to the 2008 U.S. Census Bureau, one in five children in the Detroit tri-county area live in poverty. In 2009, one in four households with children in Michigan lacked enough money to buy food the family needed, as reported by the Food Research and Action Center “Food Hardship” study.

“With the united efforts of our members, employees and Facebook fans, we are able to help fewer kids go to bed hungry,” said Feldpausch.

Headquartered in Livonia, Co-op Services Credit Union has more than 52,000 members and maintains eight full-service branch offices in the Detroit metro area, including a branch on Michigan Avenue in Dearborn. Members also have access to more than 3,000 shared branches and 28,000 ATMs nationwide. For more information about Co-op Services, visit the credit union web site at www.cscu.org or call 800.321.8570.

Forgotten Harvest was formed in 1990 to fight two problems: hunger and waste. Forgotten Harvest “rescued” 19.4 million pounds of food last year by collecting surplus prepared and perishable food from 455 sources, including grocery stores, fruit and vegetable markets, restaurants, caterers, dairies, farmers, wholesale food distributors and other Health Department-approved sources. This donated food, which would otherwise go to waste, is delivered free-of-charge to 158 emergency food providers in the Metro Detroit area. Learn more about Forgotten Harvest and how to help drive hunger from our community at www.forgottenharvest.org.