Folk artist Jan Krist,  bass virtuoso Mo Jones, and singer-songwriter Rufus Harris will be playing at the 4th Fridays Coffee House in Dearborn tonight. 4th Fridays is held in Studio A the Ford Community and Performing Arts Center located at 15801 Michigan Ave. in Dearborn.  Doors open at 8pm.   Admission is $10 at the door. Tonight’s coffee special is a surprise.

Jan Krist travels the country sharing her clever lyrics and melodic tunes. She began writing and singing songs in Detroit-area folk clubs back in 1980. Over the years she spread her wings beyond the Metro area, winning praise at the nationally known Kerrville Festival in Texas in 1991, and then releasing her first album, Decapitated Society, in 1992. That album won praise from Billboard and other magazines, and Krist followed it up with 1993’s Wing and a Prayer, which also garnered accolades. 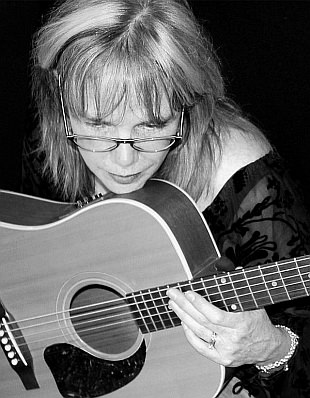 In Song for New Orleans, Krist uses the disaster of hurricane Katrina as an analogy to remind us that life is often filled with storms, but “love is on it’s way… love will act, and not stand by… yes, love is gonna be here soon. ”

Critical reviews in Billboard described her music as:  “evocative… somewhere between Joni Mitchell and Kate Bush, but it’s all Jan Krist. Her talent as a songwriter equals – if not surpasses her vocal gifts. She has an uncanny way of cutting to the heart of a topic and providing the listener with food for thought.”

She was honored as Best Vocalist in the Acoustic Division at the Detroit Music Awards in 1995.  In 1996 she celebrated the release of her album Curious, with a show at the Ark in Ann Arbor. Her release, When Planets Collide talks about the collision of politics and religion, hope and fear, grace and judgment. Her highly-anticipated new CD entitled Fallow Ground is a thoughtful mapping of the past six years of her life with the lyrical power anticipated from this acclaimed singer-songwriter.

Political polarization and paralysis is poetically dissected in lyrics from Someone :

“Polarization of the masses puts hearts and minds on overload
You can only handle so much stress – then you block out what you can’t hold
And in the womb of security some are torn by the sterile glove
While others paralyzed by rhetoric and red tape are lost to a twisted love
So which one is really better? Wolves in sheeps’ clothing or wolves who look like wolves?
And are they telling the truth or trying to pull down the wool?
What will it mean to me? What will it mean to you?
Trying to build our homes and raise our families.”

“When someone takes a life or someone buys a gun
or someone prays to God that His Kingdom come
Someone shields their eyes; Someone stops and stares
Someone rolls on by and says the problem isn’t theirs.”

Michael Lee (‘Mo’) Jones has been a musician most of his life. Starting with piano at age 8, and moving to the guitar, and then to the bass guitar at age 12. Mo began recording in the studio by the age of 13. He went on to study at the Flint Institute of Music.  His most recent project is a bass solo CD entitled Mo Jones – Bass.  He brings an amazing collection of songs, with an eclectic blend of funk, rhythm and jazz.