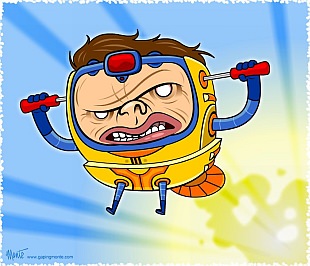 “The inspiration for this project” says curator Dan Merritt “came from an annual project at the March MODOK Madness blog”  MODOK  is a fictional character that appears in comic books published by Marvel Comics. The character first appeared in Tales of Suspense #93 (Sep. 1967) and was created by Stan Lee and Jack Kirby.

The exhibit opened on September 25th  and will be on display until December 8th. All pieces are for sale, and will be available for pick up at the end of the show.

The HEADSPACE Gallery is inside Green Brain Comics which is located at 13210 Michigan Avenue in East Downtown Dearborn.