Dearborn,  MI – A contest was held recently to determine the most Super Sunflower in Dearborn. Mammoth Sunflower seeds were distributed at Snow Branch Library in May, then gardeners planted and tended their sunflowers all summer. Contestants brought their sunflowers to the library on Saturday, September 11, for measurement and display.  Contestant received a participation certificate and a prize. 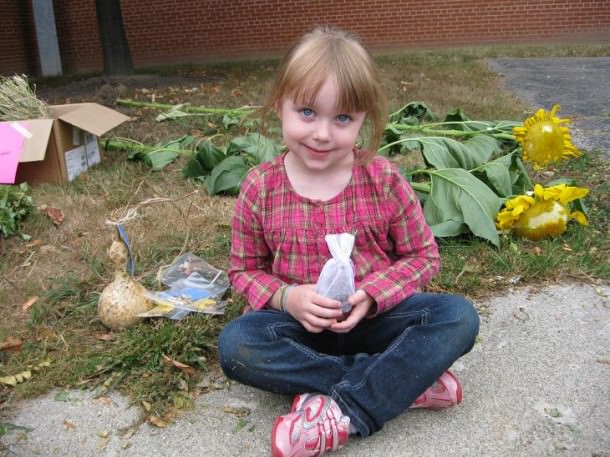 Madison Long, age 4, a veteran of a previous sunflower contest, assisted her grandparents in growing her sunflowers.

Peter Goodman, age 5, and his father show off their impressive sunflower.

According to Wikipedia: “Helianthus annuus, or Sunflowers, are annual plants native to the Americas, that possess a large inflorescence (flowering head). With Helianthus annuus, what is usually called the flower is actually a head (formally composite flower) of numerous florets (small flowers) crowded together. The outer florets are the sterile ray florets and can be yellow, maroon, orange, or other colors. The florets inside the circular head are called disc florets, which mature into seeds.”

“The florets within the sunflower’s cluster are arranged in a spiral pattern. Typically each floret is oriented toward the next by approximately the golden angle, 137.5°, producing a pattern of interconnecting spirals where the number of left spirals and the number of right spirals are successive Fibonacci numbers. Typically, there are 34 spirals in one direction and 55 in the other; on a very large sunflower there could be 89 in one direction and 144 in the other. This pattern produces the most efficient packing of seeds within the flower head.  Sunflowers most commonly grow to heights between 1.5 and 3.5 m (5–12 ft). Scientific literature reports that a 12 m (40 ft), traditional, single-head, sunflower plant was grown in Padua in 1567.”

More sunflower photos can be found in the photo gallery.