DEARBORN, Mich. – Forever Plaid, the number one off-Broadway show in the country, is coming to the Ford Community and Performing Arts Center for a performance on Tuesday night, October 26 at 8 p.m.

A musical comedy full of beautiful four-part harmonies, Forever Plaid is a witty and insightful story about four young singers in the 1950s—Jinx, Sparky, Francis and Smudge—who are killed in a car crash on the way to their first major concert. Miraculously revived 50 years later, they get a second chance to fulfill their biggest dream and perform the show that never was. 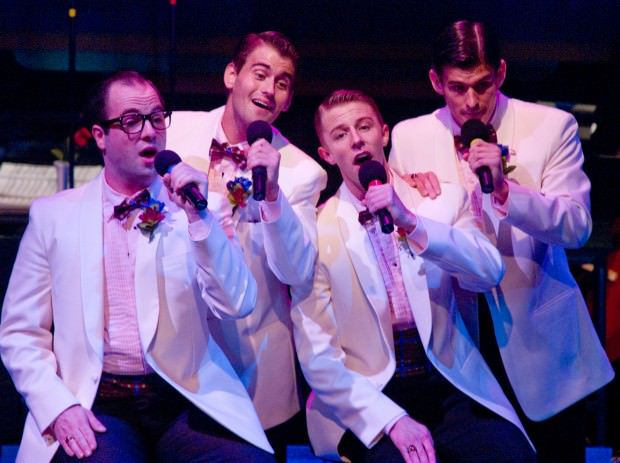 The stars of “Forever Plaid” - the number one off-Broadway show in the country. The show will be performed at the Ford Community and Performing Arts Center on Tuesday, October 26 at 8 p.m.

There are problems of course, not least of which is that they are dead, as well as more prosaic challenges, such as remembering lyrics and moves that they haven‘t sung or danced in over 40 years.

This hilarious production features the upbeat music made popular in the 1950s by entertainers like Perry Como, Eddie Fisher, The Four Lads and The Ames Brothers, and includes such hits as “Catch A Falling Star,” “Sixteen Tons,” “Crazy ‘Bout Ya Baby” and “Love Is a Many Splendored Thing.”

This show is part of the 2010-2011 professional season at the Michael A. Guido Theater, which features a wide variety of high-quality entertainment at affordable prices.

Tickets are also available on-line at www.dearborntheater.com.  Special season ticket packages are available, as are group discounts. For further information, call the box office at 313-943-2354.