You are here: Home / Community / Daniel L. Ryder Named Veteran of the Year

Ryder will be honored during the City’s official Veterans Day ceremony, at 11 a.m. on Thursday, Nov. 11, in the City Council Chambers at Dearborn City Hall. The public is invited and encouraged to attend. City Hall is at 13615 Michigan Avenue (corner of Schaefer). 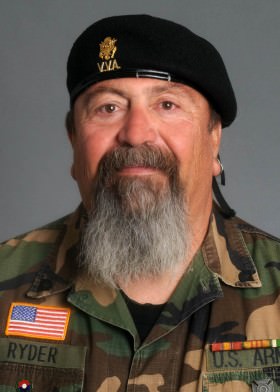 In choosing Ryder, the selection committee cited not only his years of military service to the nation but also his high level of dedication to veterans’ organizations and causes.

Ryder said, “It’s about helping those who need it. I’m a small cog in the wheel. Dearborn is a great veterans’ town.”

Among his volunteer contributions, Ryder is the assistant director of the Legion Riders Post 364 and post chaplain for the American Legion Fort Dearborn Post 364. He is also a member of the Honor Guard for the Vietnam Veterans of America Chapter 267 and assists with Patriot Guard missions.

Ryder speaks humbly about his military service: “We were just everyday people that went and did something our fathers and grandfathers did. This is America. You lay your life down if you have to. Now we work hard to contribute to the community.”

Robert Korenchuk, who nominated Ryder for Veteran of the Year, says of his fellow veteran: “Dan is a leader. He never hesitates. He never asks for recognition. He is always there.

“I can’t say enough good things about Dan,” Korenchuk continued. “He’s our spiritual advisor, a good man, a top of the line guy. Veterans are his foremost concern. He never asks for anything for himself. This distinction will be a very high honor in Dan’s life.”

Ken VanHooser, who also nominated Ryder and is himself a past Veteran of the Year (2002) and board member of the Vietnam Veterans of America Post 267, echoes that sentiment.

“This award isn’t about what the veterans did in war but what they did when they came home to help their brothers. Danny is always there. He’s a wonderful man. He’s got a heart of gold, will constantly give and now he’s going to receive something and that’s nice.”

Ryder’s Army service began in July 1970 when he was drafted after graduating from Edsel Ford High School. He drove a truck while attached to an engineer unit in Vietnam.

“I left Vietnam one day, landed in Seattle the next day and the following day I was home. My mom, dad, aunt, uncle and cousin were at the airport. It was like ‘OK you’re back,’ ” he said.

“Buddies that I used to hang around with were now working. Thanks to Dearborn and our mayors for being 100 percent behind veterans and hiring us to work for the city. I’ve never heard of another town like this. Now I’m retired after 33 years in the Department of Public Works,” Ryder said.

Ryder volunteers on behalf of veterans and their organizations. As chaplain for the American Legion Fort Dearborn Post 364, Ryder leads meeting prayers and keeps abreast of hospitalized veterans and those who’ve passed away.

For 17 years as member of the Vietnam Veterans of America, Chapter 267 Color Guard, Ryder has carried the American flag in the Memorial Day Parade. He contributes time during the Christmas season distributing gift bags to patients at the John D. Dingell VA Medical Center and portrays Santa Claus at the annual Post 364 children’s Christmas Party.

Ryder is one of the members who hold vigil on Memorial Day. He is an active volunteer for multiple activities sponsored by the VVA Chapter 267, American Legion Post 364 and the American Legion Riders, including: Help-A-Vet Dance, Dearborn Homecoming, Hog Heaven, and the City’s Flag Day and Veterans Day services.

“I’d like to encourage our returning Afghanistan and Iraq war veterans to join our groups. This isn’t about telling war stories. We’d like to steer them to people who can help them. We know what they’ve been through. We can help them get back on their feet. We can point them to financial aid and job contacts. These kids are our next greatest generation.” – Daniel Ryder

Ryder said he owes much thanks and appreciation to his wife, Gail; daughter, Danielle; sons, Bill, Joe and Don Montroy; and grandchildren, Dylan, Dustin and Ana.

“I would also like to thank the past Vets of the Year for bestowing this great honor on me.”