You are here: Home / Arts / The Nutcracker Returns to Dearborn

DEARBORN, Mich. – Enter a world of Yuletide fantasy with angels, sugarplums, a magic prince, a dreamy girl, a mysterious old man and a Christmas tree that grows sky high.  The timeless story of The Nutcracker returns to the Ford Community & Performing Arts Center on Dec. 3 and 4, with the Ballet Americana and its principal dancers from the New York City Ballet accompanied by the Detroit Symphony Civic Orchestra.  Tickets are $12 to $24. 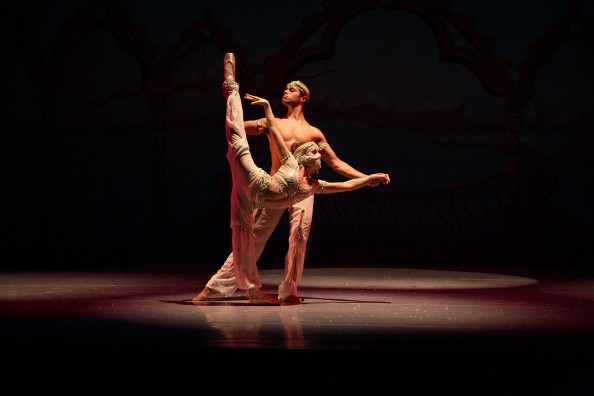 Three young dancers from Dearborn perform in the world-class ensemble: Amy Jenkins, a Dearborn High School student who plays the lead role of Clara; Devin Kilmer, a student at Edsel Ford High School; and Maddie Kaplan, who portrays a “party child” in Act I.

Stunning dancing, elaborate scenery, lavish costumes and a captivating Tchaikovsky score transport the audience to a magical world where Clara and her prince battle an evil mouse and travel to the land reigned by the sugarplum fairy.

Fairchild and Veyette have danced numerous roles in The Nutcracker. Fairchild entered the School of American Ballet (SAB), the official school of New York City Ballet, in the fall of 2000. A year later, she became an apprentice with New York City Ballet, then in 2002 joined the company as a member of the corps de ballet. She was promoted to the ranks of soloist in 2004 and principal dancer in 2005. She has danced featured roles in dozens of productions.

Veyette has been on a similar career track. He entered the SAB in the fall of 1998 and two years later became an apprentice with New York City Ballet. Later in the 2000 season, he joined the corps de ballet, advancing to soloist in 2006 and principal dancer in 2007. He has danced featured roles in about 35 productions.

The production is part of the 2010-2011 professional season, which features a tremendous variety of high-quality entertainment at affordable prices. The season lineup also includes great shows by local musical and performance groups.

For more detailed information about this or other shows, download the season brochure at dearborntheater.com. Buy tickets by calling the Box Office at 313-943-2354, purchasing them online or visiting The Center at 15801 Michigan Avenue.