Edison2’s Very Light Cars — employing breakthrough combinations of light weight and low aerodynamic drag — won the grueling X PRIZE Mainstream Class, in which cars were required to seat 4 passengers, go at least 200 miles on a tank or charge, and meet stringent performance, handling and emissions standards, all while achieving over 100 MPGe. 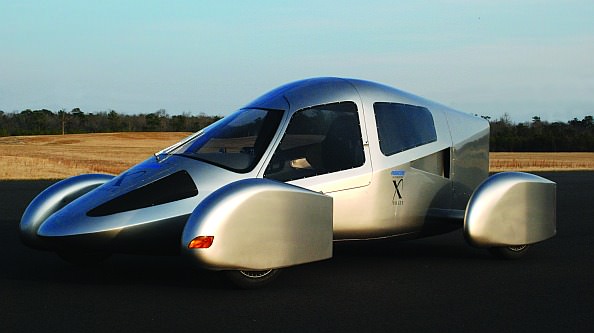 Edison2’s founder and CEO Oliver Kuttner was clearly thrilled at the prospect, “Henry Ford Museum has one of the most prestigious collections of historically important automobiles and we’re very proud to be included,” said Kuttner. “The original Edison labs provided philosophical inspiration to our work and led to our name, and here we are, with our winning car becoming a neighbor of the lab.”

“We are delighted to have this incredibly innovative vehicle be part of Henry Ford Museum which celebrates America’s ideas and innovations,” said Patricia Mooradian, president of The Henry Ford.

“Our mission at The Henry Ford is to present the stories of innovation, ingenuity and resourcefulness that completely changed the way we live and use those stories to inspire future generations to make a difference and create a better future. Edison2 represents creative thinking and that can-do attitude that is at the core of our country’s beginning.”

“This is a perfect fit for our future exhibition that will tell the story of the impact the automobile had on our lives and the innovations that emerged with its creation. The exhibit will be the world’s largest, most interactive automotive experience that focuses on the process of innovation and the perfect place to feature the Edison2 as a ground-breaking design that connects the past to the present and the future,” said Christian Overland, vice-president of Collections and Experience Design at The Henry Ford.

The announcement by The Henry Ford coincides with preparations for the North American International Auto Show, which begins with media days on Monday, January 10, 2011. Edison2’s winning car will be exhibited alongside the E-Tracer, winner of the Alternative Tandem class at the X Prize Foundation’s booth.

“We at the X PRIZE Foundation are thrilled that the Edison2 vehicle will be on display at Henry Ford Museum. The achievement of over 100 MPGe by the Edison2 vehicles during the Progressive Insurance Automotive X PRIZE was a historic moment for the automotive community, and deserves to be recognized in a museum of the caliber of The Henry Ford,” stated Cristin Dorgelo Lindsay, Vice President of Prize Operations for the X PRIZE Foundation.

Kuttner, a Charlottesville, Virginia entrepreneur and lifelong auto enthusiast, founded Edison2 LLC in 2007. He assembled a top-tier team of racing and aerospace engineers, designers and mechanics for the X Prize competition. Although Edison2 personnel have numerous victories at Le Mans, Sebring and Daytona, Chief of Design Ron Mathis sees this accomplishment as special. “I see my 30 years in racing as preparation for this — building a car for the future. Our winning car going to The Henry Ford is validation of the approach we have chosen: cars which simply take very little energy to move.”