DEARBORN, Mich.– When Dearborn resident George Stevens moved into Oakwood Common’s independent living community in 2007, he learned that he couldn’t bring his ham radio equipment and put up a 50 foot tower outside of his apartment. 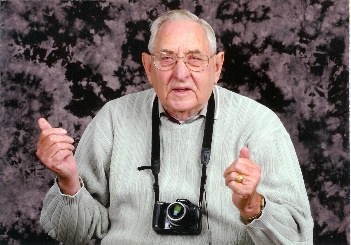 “Ham radio towers are prone to cause interference with televisions and phones,” said Stevens, who became a licensed ham radio operator when he was 16 years old and still maintains his Advanced Class Operator license. “I knew my new neighbors wouldn’t appreciate it.”

Even with his longtime experience as a ham radio operator and a volunteer at Oakwood Hospital, Stevens shared that his life was very lonely before moving into Oakwood Common. He wife had passed away in 1986.

“Imagine doing your own cooking and shopping and just sitting in front of the television in the evenings with nobody to talk to,” said Stevens, whose daughter helped to convince him to move to Oakwood Common. He kiddingly added, “If she had done her job properly, I would have moved here 10 years ago.”

Helping people at Oakwood Hospital’s information desk since 1982, Stevens accumulated and was honored for 30,500 hours of volunteering, which he continued until only a year and a half ago.

No longer volunteering at the hospital and without his ham radio equipment, Stevens shared it was Mary Granata, Oakwood Common’s manager of sales, who suggested that he explore photography.

“It’s all Mary’s fault. I never owned a camera before,” joked Stevens, who now is rarely seen without one of two digital cameras around his neck taking pictures of Oakwood Common’s events and activities. “I found out I love taking pictures, and the other residents seem to enjoy the photos I take of the wetlands here—especially those of the birds.”

Stevens estimated that after he bought his first camera he spent hours going over the manual and probably took a thousand pictures of the chair in his living room learning how to use the camera properly.

It was Granata who recently enlisted Stevens to take pictures of the Oakwood Common “Bistro” renovation project currently underway to transform the café, private dining room and fitness areas to include a comfortable lounge with bar and fireplace for residents to socialize with friends and family.

Not only does Stevens take the pictures, he also posts them on Oakwood Common’s Facebook page.

“I learned about Facebook from a neighbor’s daughter who lives out of state. She helped me set up a Facebook page, so I could share news about her mother and post pictures,” added Stevens. “I’m still a little hesitant about using Facebook, but I’m happy to post pictures on Oakwood Common.”

Granata estimates and Stevens agrees that his new photography love has taken 20 years off his life. Not bad for someone who will be 90 years old in June.

Oakwood Common offers one and two bedroom apartments located at 16351 Rotunda Drive, within a beautiful 29-acre retirement community that includes exquisite landscaping, nature trails and scenic views along the historic Rouge River Gateway in Dearborn. Oakwood Common apartments, available with flexible payment options, offer exceptional amenities for independent living and can be readily customized. Assisted living and a comprehensive rehabilitation and skilled nursing center are also available for those with additional needs. For more information and to arrange tours, call 800-642-4663.