DEARBORN, Michigan -The University of Michigan-Dearborn’s Center for Innovation Research – iLabs – today released its Innovation Index for the third quarter of 2010. The Index, which quarterly measures economic innovation activity in the state of Michigan, fell slightly from 85.8 to 85.3. 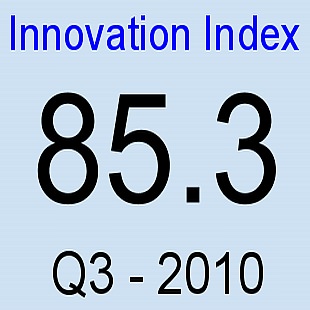 “There were some strong factors and some weak factors in this report but it was certainly encouraging to see signs of the job growth Michigan’s economy needs,” according to Lee Redding, associate professor of business economics and director of the Innovation Index at the College of Business.

The Innovation Index tracks economic innovation in Michigan based on calculations of employment of “innovation workers,” trends in venture capital, trademark applications, incorporation activity, small business loans and gross job creation. In the most recent quarter, two indicators rose while four declined. The Index is modestly below its year-ago level and well below its pre-credit crunch numbers.

Positive indicators in the third quarter 2010 Innovation Index were gross job creation,which increased due to jobs added by new and expanding companies and employment of innovation workers, which showed a increase in the percentage of workers employed in science and engineering.

Negative indicators included incorporations and LLC filings, which continued a drop from earlier quarters;  Small  Business Administration loans, which experienced a drop in the third quarter linked to the expiration of stimulus provisions; venture capital funding in Michigan, fell from a very high number reported for the second quarter and trademark applications,  which fell after two quarters of increases and are now slightly below the year-earlier total.

The next University of Michigan-Dearborn Innovation Index report, due out in earlyJune, will contain a detailed report of fourth quarter activity with a preliminary indication for the first quarter of 2011.

“In looking at this data indicators currently appear mixed creating a likelihood of theIndex holding near its current level in the fourth quarter,” said Redding. Redding collaborates on the project with economist Anne-Louise Statt.