You are here: Home / Arts / Free Spring Fling Concert March 27 at the Library 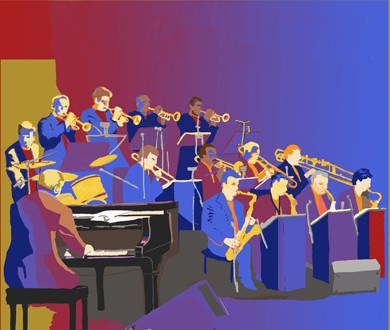 The free concert event is 3 p.m. to 5 p.m. in the library’s auditorium and is sponsored by the Friend’s of the Library, Dearborn.   For more information, call the Dearborn Public Libraries at 313.943.2330.

Background of the Big Band

The big band is a type of musical ensemble associated with jazz, a style of music which became popular during the Swing Era from the early 1930s until the late 1950s. Big bands evolved with the times and continues to today. A big band typically consists of approximately 12 to 25 musicians and contains saxophones, trumpets, trombones, marimba, singers (or vocalists), and a rhythm section. The terms jazz band, jazz ensemble, stage band, jazz orchestra, society band and dance band may be used to describe a specific type of big band.

In contrast to smaller jazz combos, in which most of the music is improvised, or created spontaneously, music played by big bands is highly “arranged”, or prepared in advance and notated on sheet music. The music is traditionally called “charts”. Improvised solos may be played only when called for by the arranger.