DEARBORN, Michigan – “Swathed in energy and pulsing rhythms…its singable melodies seem to fly from the harpists fingers and wrap the audience in pure joy!” A fascinating instrument, the opportunity to hear a harp duo is rare indeed. The Dearborn Symphony concert on April 15 highlights James Hartway’s “Island Dances for Two Harps and Orchestra.” 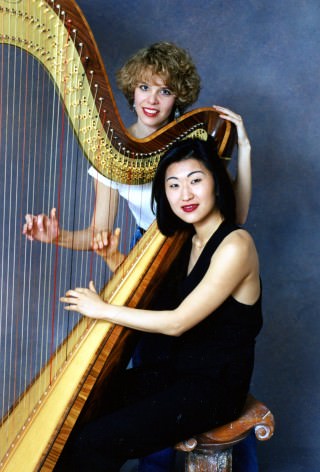 “Island Dances” will be performed by duo harpists Kerstin Allvin and Jung Wha Lee, who perform as the Arianna Harp Duo and also have careers as international soloists and orchestra members. The concert at the Ford Community and Performing Arts Center begins at 8 p.m. following an insightful and humorous free preview of the evening’s music at 7 p.m. by James Walters, a musician and Dearborn music teacher.

A vivid and colorful work filled with Caribbean rhythms, the concert features an exciting mix of American music that includes works by two composers with local roots, beginning with the rousing “Finale” from Symphony No. 2 by Steven Errante, who was born and raised in Dearborn. An active composer and arranger, he studied composition and conducting at the University of Michigan and the Juilliard School and wrote the score for the Boar’s Head Festival performed annually in Dearborn/Detroit since 1972. Errante has been Conductor of the Wilmington Symphony and a member of the UNCW Department of Music faculty since 1986.

“Island Dances” was written by acclaimed Detroit-born composer James Hartway, Professor of Music and Director of Music Composition and Theory at Wayne State University. Hartway has composed more than 90 works, including orchestral, opera and choral pieces, concertos, chamber and solo works that have won numerous awards and honors. Praised as being “expressive, thoughtful and accessible,” his music has been performed and recorded around the globe.

Next up is music by Grammy nominated Christopher Theofanidis who wrote “Rainbow Body” in 2000 for the Houston Symphony, where it received a standing ovation at its premiere. In 2003 Theofanidis won the London Masterprize competition for the piece. “Rainbow Body” not only won the competition, its colorful and lush writing caught the ear of conductors everywhere, catapulting it to more than 100 performances by orchestras internationally in the last 11 years.

The concert ends with the ever-popular and downright fun Four Dance Episodes from Rodeo by Aaron Copland, America’s quintessential composer. One of Copland’s most popular works since its premiere by the Boston Pops Orchestra in May 1943, the story is about a cowgirl trying to attract the romantic attentions of a cowboy. Copland’s American Wild West masterpiece is based on fiddle and dance tunes, railroad and cowboy songs; the music is exhilarating, right through the three massive chords that bring the music to its famous, foot-stompin’ close!

The concert is made possible by Friends of the Dearborn Symphony (formerly WADOS). Patrons are invited to meet the artists at the afterglow made possible by Ronald M. Pruette from Peninsula Wealth Management, UBS.

For a complete night on the town, the Symphony has partnered with local restaurants to offer a 20 percent diners’ discount for symphony ticket-holders on concert nights. Advance reservations are recommended at Andiamo Dearborn, Crave (25% off), Kiernan’s & Silky’s, La Pita, Ollie’s, The Dearborn Inn, and The Henry.