DEARBORN, Mich. – Michigan Supreme Court Chief Justice Robert P. Young, Jr. joined the judges of Dearborn’s 19th District Court, Mayor John B. O’Reilly, Jr. and local students on May 10 to celebrate the 54th anniversary of Law Day – a time set aside each year to help Americans remember the importance of the rule of law. 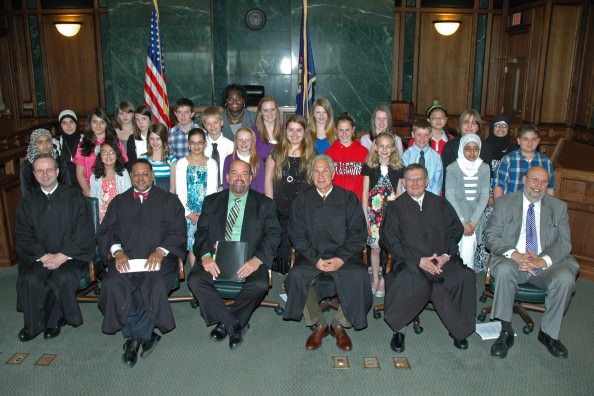 The 2011 Law Day theme provided students with an opportunity to celebrate the legacy of John Adams, explore the historical and contemporary role of lawyers in defending the rights of the accused, and enhance understanding of the fundamental principle of the rule of law and how it applies to current issues.

Even before John Adams became the second president of the United States, he was a prominent lawyer. He strongly believed in adherence to the rule of law and defense of the rights of the accused, even in cases when advocates may represent unpopular clients and become involved in matters that generate public controversy.

A total of 24 winning essays were selected in the Law Day contest: a first place, second place and third place winner and three honorable mentions in each grade level — fifth through eighth.

Here are the winners of the 2011 Law Day essay contest: