DEARBORN, MI — When longtime Dearborn residents Bob and Sylvia Rock moved from their Dearborn Hills home to Oakwood Common four years ago, Bob didn’t leave his woodcarving hobby behind. Indeed, Rock admits it was his longtime hobby which helped him through the early transition to their new residence.

Retired from the Bell System companies in 1982, Rock has been woodcarving since 1972. Self taught, he shared that an earlier hobby of linoleum block carvings and printing of Christmas cards and then art classes at Wayne State University helped him refine his woodcarving skills. 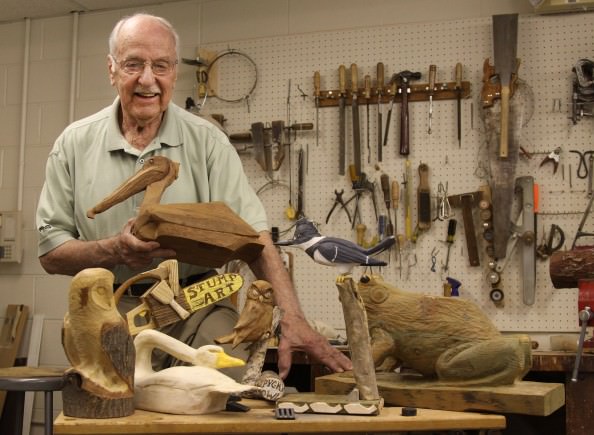 Bob Rock displays some of his wildlife woodcarvings in the Oakwood Common woodshop.

Specializing in wildlife carving including water fowl, Rock said, “Getting the anatomy correct for each piece is so important for serious woodcarvers.”

A longtime member of the Metropolitan Woodcarvers which meets in Royal Oak and hosts an annual show, Rock is considered a serious woodcarver. He’s also invited as one of 25 local artists to participate in Wayne State University’s annual spring conference for seniors, hosted by the Institute of Gerontology.

Two of Rock’s creations, carvings of an Eastern Bluebird and a Cedar Waxwing, are nestled in knot holes of a split rail fence along the pathway that surrounds the lush grounds of Oakwood Common.

“A lot of people are surprised to find them and initially think they’re real,” added Rock. “This is their fourth year outside.” 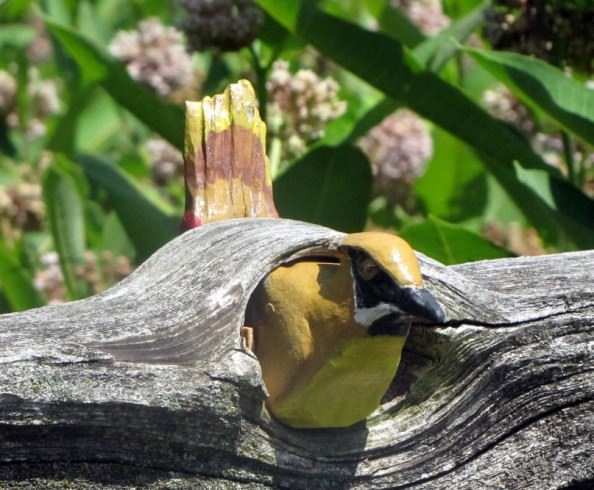 Pelicans and owls are among Rock’s favorite subjects, and he maintains an extensive photo file and history of different species. A carving of a swan in a sleeping position is another unusual piece he recently carved from poplar. Described as a “confidence decoy,” it appears almost real and gives ducks confidence to land nearby in supposed safety.

“I try to work at least one hour each day. I learned this from Cecil Carstenson, a mentor and author of the book ‘Art and Creation of Wood Sculpture.’ He also advised to carve things you like, because it helps you get through the dark spots or when you make a mistake,” added Rock.

During the past few years, Rock has also transitioned from doing large outdoor commissions of wildlife carvings from trees and tree stumps located throughout southeastern Michigan to carving smaller pieces of human figures.

That’s not the only transition for the dedicated woodcarver. Because of the wetlands and abundant wildlife on Oakwood Common’s 29 acres, there’s a Wildlife Committee which Rock chairs. In July, he was also elected to serve as president of Oakwood Common Residents Association.

“You can really call this a community—it’s a great size and not too big,” said Rock. “And there’s an overabundance of activities.”

Rock and his wife also appreciate the accessibility of the underground parking garage and their own storage area, separate from the space he maintains in the woodshop for his woodcarving projects.

When asked about getting wood for his projects, Rock quickly responds, “Family, friends and others at Oakwood Common keep me well supplied.”