DEARBORN, Michigan – British born Chef Pearse Tormey recently revealed some of the favorite menu selections of residents at Oakwood Common, where he has served as executive chef for nearly three years. 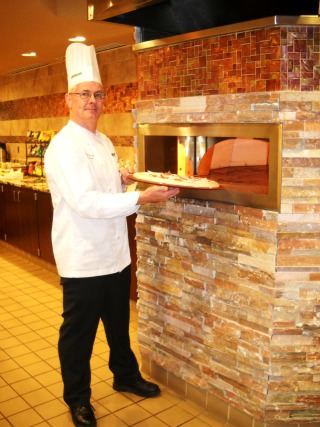 “Our residents have very specific tastes but they’re not unlike most people who want their food to taste and look good,” said Chef Tormey, who has worked as a chef throughout the U.S. since 1978, including the Beverly Hills Hotel in California to various hospitality venues in Florida, Massachusetts and Michigan.

According to Chef Tormey, he was attracted to Oakwood Common because of the opportunity to cook in a more healthy way, although he admits that seniors still like their junk food on occasion.

“It’s fun to add things to the menu that people specifically request, which may include everything from creamed corn to blueberry pie,” said Chef Tormey. “We do our best to accommodate and give them the feeling of ‘eating at home’.”

Chef Tormey and his kitchen staff of 20 plan and prepare three meals a day, 365 days a year. Dinner service always includes two specials as well as the option to choose from a special à la carte menu that features everything from traditional hamburgers to regional specialties, including frog legs.

Each Wednesday the dinner menu also features a specially prepared healthy dish such as breast of chicken with penne pasta and sundried tomatoes.

“The individual personal pizzas are an increasingly popular favorite,” added Chef Tormey. “Now families can invite the grandkids over for a pizza party.”

Having the opportunity to be creative and change menus seasonally is another benefit to Chef Tormey’s job at Oakwood Common.

He revealed just a few of the menu changes for the coming winter months which include will beef pot pies, apple tarts, whipped rhutabaga and cranberry cheesecake.

Chef Tormey shared that he is a frequent visitor to the dining room to talk with residents about the food selections. “That’s how I get my feedback, and people here are so sweet. It’s like talking with your grandparents,” he said.