DEARBORN, Michigan  – Every year the Rotary Club of Dearborn distributes more than $25,000 in scholarships to graduating high school seniors from Dearborn schools—a goal that is met through a variety of fundraising efforts.

Six years ago, the Club began hosting an annual golf outing to help raise funds for the Hugh Archer Memorial Scholarship, named in memory of the longtime Rotarian and Dearborn resident who passed away in 2005.  The first Archer scholarship of $1,500 has grown annually to $3,500, awarded in 2011.

“This outing is a friendly competition among Rotarians and representatives from the community including Dearborn Public Schools and different City departments,” said Dearborn Rotarian Roger Miller, who chaired the September event which attracted eight more golfers than the previous year. 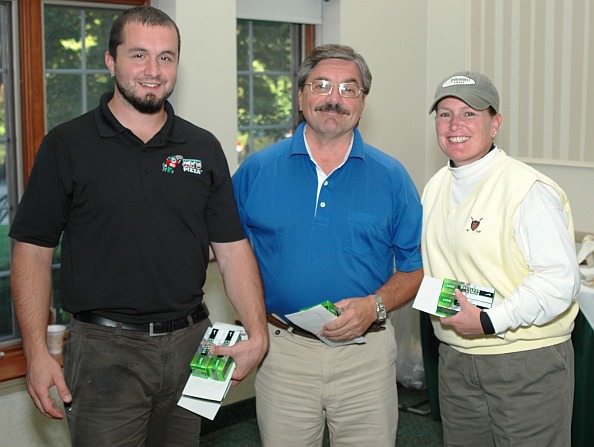 Mike Guido, Joe Guido and Lisa Marino are all smiles as the overall team winners at the 2011 Hugh Archer Memorial Golf Outing, sponsored by the Rotary Club of Dearborn. Not pictured is Joe Guido, Jr.

The Dearborn City Departments Golf Challenge, a tournament within the outing, was won this year by the 19th District Court team which included Bill Hultgren, Julie Pucci, Bill Osbach and Gene Hunt.

Among the golfers who participated were representatives of Spiratex, a plastics extrusion company in Romulus,Mich., that was founded by Hugh Archer.

“The Spiratex Company continues to be a major donor to the Hugh Archer Memorial Scholarship,” added Miller.  Spiratex officials and members of the Archer family were also given special recognition at the golf outing banquet.

High school seniors at any of the Dearborn Public Schools, who are interested in applying for the 2012 Hugh Archer Memorial Scholarship, are encouraged to visit the Club’s website at www.DearbornRotary.org.  Beginning November 1, 2011, a link to the 2012 application form will be available on the website page for the Hugh Archer Memorial Scholarship.

Established in 1923, the Dearborn Rotary Club is one of 33,000 clubs located in more than 200 countries worldwide.  Rotary is the world’s first and largest international service organization, founded in 1905 by Paul P. Harris, a lawyer, in Chicago, Illinois.  The Rotary Club of Dearborn meets every Thursday from 11:30 a.m. to 12:45 p.m. at the Fairlane Club on Hubbard Drive in Dearborn. Guests are always welcome.