You are here: Home / Community / Richard Fleek Named Dearborn’s Veteran of the Year 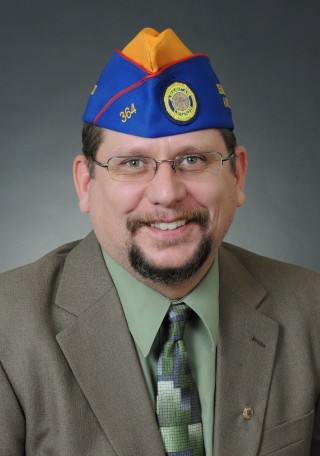 Fleek will be honored during the City’s official Veterans Day ceremony, at 11 a.m. on Friday, Nov. 11, in the City Council Chambers at Dearborn City Hall, 13615 Michigan Ave. The public is invited to attend.

Fleek said he is humbled by those who nominated him and thanks the DAWVC Veteran of the Year selection committee for the recognition.

“I’m awe-struck and speechless at the honor,” he said.

“I became active in veterans organizations initially because I missed the camaraderie, missed fellow vets who shared my own experience. By the time I was 21 years old, I’d walked on four continents: Africa, Asia, Australia and the United States. Just to see how other countries lived brings home what we take for granted.

“That isn’t something you forget,” he said. “It changes you.”

The selection committee, comprising past DAWVC Veterans of the Year, cited Fleek’s many efforts to honor veterans and improve their quality of life.

Committee member Gary Tanner, 2009 DAWVC Commander and 2008 Veteran of the Year, said, “We look for qualities such as honor, leadership, compassion, and commitment. As part of the DAWVC Ritual Team, Richard makes sure that our veterans receive the honor and dignity befitting their selfless service in our nation’s military.

“After the Missing in America project was launched around the country and State Representative Gino Polidori penned the legislation required to adopt MIAP in Michigan, Richard was adamant that this should be incorporated into our Memorial Day ceremonies,” Tanner said.

“He assembled a committee to make it happen and raised $10,000 in donations for the Military Caisson,” he said. “Richard continues to seek out leadership roles in the various veterans organizations he belongs to and continues to advocate for veterans causes and for those in need.”

Volunteering for Veterans
Among his other volunteer contributions, Fleek is the commander of the VFW Lt. Archie Kelly Post 2107, serves on the executive board of the American Legion Post 364, is a member of the Catholic War Veterans and is the adjutant for the Dearborn Allied War Veterans Council. In 2009 – 2010, he served as the DAWVC Commander.

In honoring a Veteran of the Year, the DAWVC raises awareness of the tireless volunteer efforts of local veterans and thanks them in a meaningful way through mentor, peer and community recognition.

Ted Gagacki, who nominated Fleek and is the 2003 Veteran of the Year, said of his fellow veteran, “I’ve known Rich since he first walked into the Legion. I like the way he conducts himself. He is a calm professional who steps up and works for the betterment of his family and our post. He’s dedicated many hours towards veterans’ causes.

“Rich’s heart has always been with the veterans he serves,” Gagacki continued. “He’s raised money and morale and changed the community for the better by the introduction of the dignified and long deserved Memorial Day funeral procession for veterans who died without resources and whose ashes were left sitting on the shelves of local funeral homes. I’m impressed with how he and others continue to work tirelessly for that cause.”

Military Service
Fleek served in the Navy, both active duty and reserve, from 1985 – 1992.

The military was a family calling. Fleek’s great grandfather was in WWI and two grandparents served in WWII. One was on the USS Missouri when the Japanese signed the peace treaty. Another serving in the Army was shot in France. Fleek has his uniform hanging in his closet.

As for his own service, “I was on the USS Carl Vinson, out of Naval Air Station (NAS) Alameda California. I was a yeoman for the air boss on the largest ship in the fleet. It was breathtaking.”

Fleek remembers being at sea for seven months in the Western Pacific.

“On the way back from the Indian Ocean, at the end of the Cold War, we got orders from President Reagan,” said Fleek.

“He wanted to prove that the United States military could go anywhere at any time. He sent us to the Aleutian Islands to flex some muscle,” he said.

Fleek later was honored by the president with the Meritorious Unit Commendation Ribbon.

Fleek’s ship, the USS Carl Vinson, has a decorated history. It launched the first wave of attacks against the Taliban in Afghanistan and transported Osama bin Laden’s body for burial at sea. Lighter moments include the filming of the movie Top Gun, which took place on the Vinson while Fleek was serving on it.

Connected to veterans
Fleek, who is a network IT coordinator at L&W Engineering, credits his wife, Brenda, with encouraging him to seek out other vets.

He says he was hooked when he walked into Post 364 and immediately people introduced themselves, hugged and thanked him.

The first activity he got involved with was the Ritual Team. “I rememberedmy combat vet grandfathers. I felt every time I performed a funeral service I was honoring them.

“Our country is basically in two or three wars. Some of these men and women have been deployed six times. They must live with the physical and mental scars of that for the rest of their lives. We veterans want to thank these young people coming home and make them feel welcome at our posts. “

Fleek continued, “I know how important it was for me to stay connected. I lost track of one of my good military friends for 20 years. Finally I found this website Together We Served and found out he was still in the military. Three months later he retired. I loaded my kids in the car and went to his retirement ceremony in Virginia Beach Virginia. I felt I needed to be there. That’s what veterans do.”

“I’ll remember my grandfathers. I’ll honor veterans. I’ll encourage civilians to visit a veterans’ hospital. I’d like to see everyone take two hours, even just one time, and talk to these veterans,” he said.

“This is a great opportunity to pay tribute to our veterans and our military service members,” said Tanner.