DEARBORN, Mich. – The Dearborn Farmers’ and Artisans’ Market wrapped up its fourth successful season on the last Friday in October. Over 40 vendors participated in the market; 15 of them, like Binnell Bros knife sharpeners and Marsh Greenhouse Too, were new additions this year. Joan Reed, Market Manager, estimates approximately 17,000 people shopped at the market at some time during the 26 days the market was in session. 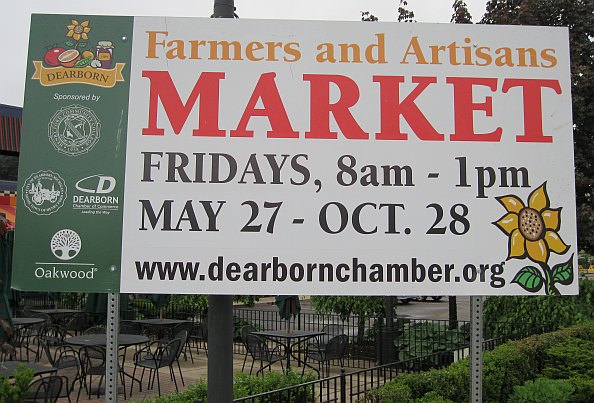 Some changes in the market made it even more enjoyable this year than in years past. The service drive that bisects the market was closed on market days. Not only did this make the market safer and more relaxed, but it also created a casual space where the market’s tables and chairs were set up allowing patrons to sit down with friends for some coffee from Cheeky Monkey and croissants from Golden Wheat to enjoy some of the just purchased items like fresh roasted corn or a hot dog or pizza slice.

A new attraction at the market this year was the week-by-week painting of the Michigan Apple Trail apple by participants in Pockets of Perception (POP). Each week, POP students from Dearborn’s three high schools, using paints donated by Campbell’s Wallpaper and Paints, turned a dull apple form into the second highest apple auctioned at the end-of-season gala at Eastern Market.

Ms. Reed was also pleased that this year our market accepted Electronic Benefit Transfers (EBT or Bridge Card) and participated in the Double Up Food Buckets. Says Reed, “These programs brought almost $4,000 to our Michigan farmers and put fresh produce and other healthy products on the tables of beneficiaries of the program.”

The market will return next spring in its same location behind Bryant Branch Library on Friday, May 25, 2012 to begin its fifth season. The market will be open, rain or shine, each Friday from 8:00 a.m. to 1:00 p.m. and in the evenings from 4:00 to 7:00 on the third Tuesday of June, July and August.