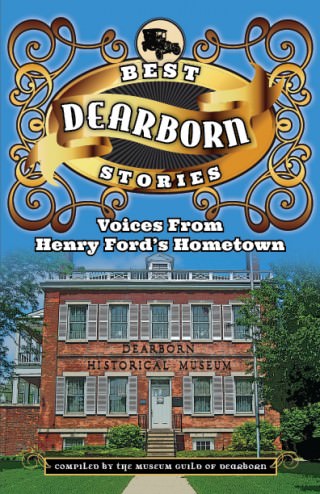 The museum’s archives document the city’s 225-year history, including material on its settlement in 1786, its growth around an 1830s U.S. arsenal, labor struggles in the 1930s and ’40s and the 1942-78 reign of segregationist mayor Orville L. Hubbard.

City funding for the museum is set to expire next July, but supporters are hoping a scheduled “world’s largest book signing” will help the institution keep its 19th-century buildings open to the public.

The museum will receive proceeds from the sale of a soon-to-be-published collection of anecdotes and reminiscences from some 150 residents and former residents. The book, titled Best Dearborn Stories: Voices From Henry Ford’s Hometown, goes on sale at a Dec. 10 signing party expected to draw more than 100 of the writers who contributed stories to the anthology. The signing will be at the Andrew A. Mazzara Services and Conference Center at Henry Ford Community College from 10 til 4.

“The largest book signing I could find online had 87 authors,” said L. Glenn O’Kray, vice chair of the Dearborn Historical Commission and coordinator on the project. “We’ve already got enough commitments from our writers to satisfy me that we’ll have well over 100 on hand. And we’re all going to be wearing T-shirts identifying each of us as a Best Dearborn Stories ‘famous author.’ ”

The book is the product of an unusually fast turn-around for a multi-author compilation – less than 10 weeks from inception to publication. O’Kray conceived the project after reading an Oct. 2 article in the Times about a “Rapid Response” strategy for setting and reaching goals in 100 days or less. He secured funds from the nonprofit Museum Guild of Dearborn for the book, located a printer and a designer, and collaborated with two other commissioners in collecting and editing the stories. Final proofs of the book went to the printer Nov. 18.

Priced at $19.95 in soft cover, the 382-page book includes stories about digging up bones in the back yard, breaking into labs to rescue animals, hiding in church after lock-up time, substituting for Ford during a portrait sitting, getting cussed out by Hubbard, and discovering that a hockey opponent who kept falling down in practice had a hat trick up his sleeve.

The historical museum consists of three public buildings, two of them associated with the former arsenal. It has operated with city funds since opening as a museum in 1950. However, despite voter approval of two millage increases in November, the city is proceeding with plans to continue trimming services.

After the museum’s current city subsidy runs out during the fiscal year ending in June, it will have to rely on cash reserves that previously had been earmarked for renovation of a facility to be used for exhibits and storage. Those reserves, if used for museum operation, are expected to be depleted by 2014.

The museum has raised $35,000 since it began a new membership drive in July, and it is planning to begin a major fund-raising campaign next year, including the sale of naming rights to its buildings. Book orders and donations may be sent to the museum at 915 S. Brady, Dearborn, MI 48124. Call 313-565-3000 or email [email protected] for information.

The museum is not affiliated with The Henry Ford, a Dearborn-based destination known internationally for its Greenfield Village and Henry Ford Museum.