DEARBORN HEIGHTS, Mich. – There’s no one who knows the 40-year history of Dearborn Heights Montessori Center (DHMC) better than the Head of Schools Kay Neff. Yet, there may be no one more reluctant to talk about her own role as founder of DHMC, which has grown from a single school with nine students to a network of three schools including DHMC, Livonia Montessori Center and Plymouth-Canton Montessori School. 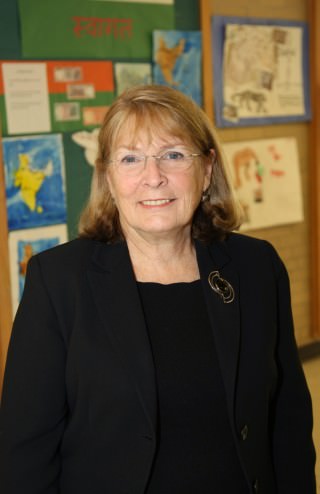 “It’s not about me,” said Neff, who added, “It’s about the success of our students, the Montessori philosophy of educating the whole child, and creating the kind of environment that helps young people learn ‘how to think’.”

During the past 40 years, many of DHMC’s students have graduated as valedictorians of Detroit area high schools, attended major universities and launched successful careers.

According to Neff, the school is now educating a second generation, who are children of former students.

DHMC’s beginning is linked with Neff’s personal mission. In 1972, she was seeking a social environment for her children, then ages two and three years old.

“At the time there were very few options available,” said Neff, who first enrolled her son in an area day care program. “He cried more and more each day.”

Looking elsewhere, Neff visited a Montessori classroom which was peaceful and a good fit for her son. However, after he was enrolled in the fall semester, the school was forced to close its doors for business reasons.

Unable to locate another Montessori school nearby, Neff who was a former middle school and high school English teacher in Southgate, decided to start her own school. In December 1972, Dearborn Heights Montessori opened in Christus Victor Lutheran Church in Dearborn Heights. The first nine students included Neff’s two children.

As DHMC’s enrollment and demand for its quality Montessori program grew, the school moved several times to serve the needs of its students, teachers and families while maintaining the authenticity of Montessori programs.

Today, both Plymouth-Canton Montessori and Livonia Montessori offer preschool and kindergarten programs along with before and after school care.

During the first several years, DHMC leased different school buildings that became available as a result of the closing and merging of various school districts. However, in 1995, DHMC purchased its current campus and building located at 466 North John Daly in Dearborn Heights.

“Our focus has always been and continues to be on investing tuition dollars in our teachers, facilities, programs and materials, and ensuring that we have well trained staff,” added Neff. The school receives no public or government funding and relies solely on tuition dollars.

When asked how their students and families differ from 40 years ago, Neff shared that the school has a greater diversity which complements the Montessori philosophy of peace and service to the community. There are components at every level of the Montessori program that help students learn how to resolve conflict and show respect for others.

Parents’ expectations have changed as well. Neff indicated that today their parents’ number one priority is safety and the overall atmosphere of the school, followed by strong academics and character development.

Although Neff hasn’t kept an official count of the thousands of students that have gone through the schools’ doors, alumni frequently return to visit.

Teachers and staff agree that DHMC has “stayed the course” by never wavering from the Montessori vision of delivering a program that educates the whole child including social, emotional, physical and intellectual.

When asked about the future, Neff quickly responds, “Continually refine and get better. We can never be good enough.”

About Dearborn Heights Montessori Center
Dearborn Heights Montessori Center (DHMC) is a non-profit educational community founded in 1972. Celebrating its 40th anniversary year, DHMC is the largest and longest-established Montessori school in western Wayne County. Programs include toddler, preschool, kindergarten, elementary, and middle school as well as summer programs and academic tutoring. Day care and latchkey are also available for enrolled children. DHMC has received accreditation from the National Association for the Education of Young Children (NAEYC) and is affiliated with the American Montessori Society, Michigan Montessori Society, and the Association of Independent Michigan Schools (AIMS). DHMC toddler, preschool, day care and latchkey programs, along with its satellites Livonia Montessori Center and Plymouth-Canton Montessori School, are licensed by the Michigan Division of Child and Adult Licensing. More information is available at www.dhmontessori.org and by calling 313-359-3000.