You are here: Home / Business / Local Efforts Bring Hope to Families in Nicaragua

DEARBORN, Michigan – “We never knew that something of so little value to us could be turned into something of value for others thousands of miles away,” said Mary Ray, who is co-owner of Campbells Paint and Wallpaper in Dearborn with husband Mike Ray.

Ray was referring to old wallpaper books given to Dearborn resident Ray Trudeau, a past Dearborn Rotary Club president who travels to Nicaragua up to four times a year on behalf of Rotary International projects. 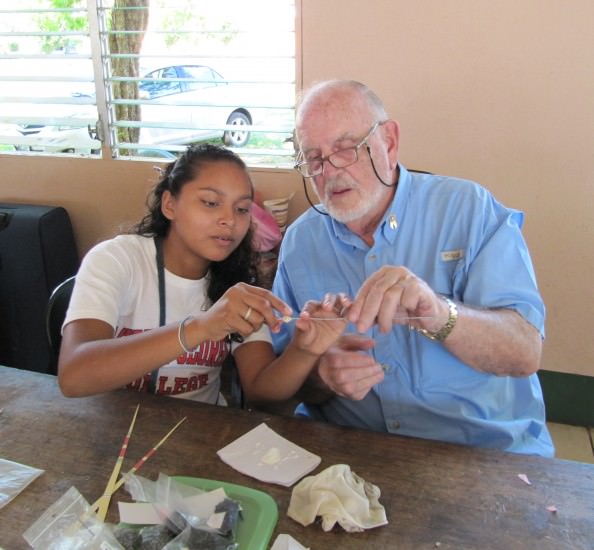 Dearborn Rotarian Ray Trudeau receives a lesson about making “Beads of Hope” from recycled wallpaper during a recent trip to Nicaragua.

For several years, Rotarians from Dearborn and other local clubs in Rotary District 6400, have raised money for projects to benefit children and their families in Chinandega, Nicaragua. Known as “Children of the Dump,” children as young a five or six years old salvage for scraps of food and recyclable items.

Today, approximately 1,700 children from the dump and surrounding rural areas have the opportunity to attend a school established by Father Marco Dessy, an Italian priest. Older students learn a variety of trades at the Betania Trade School, including woodcraft, sewing, millinery, computer repair and jewelry making.

“Our goal is to implement projects that will provide sustained economic development,” said Trudeau, who also serves as a director of the Hope and Relief International Foundation.

A Walmart truck delivers the wallpaper to a warehouse in Houston which provides the shipment of one free 40 ft. container a month to Nicaragua.

After the wallpaper arrives in Nicaragua, it is delivered to the Betania Trade School where students learn the art of recycling wallpaper into jewelry beads—thus, Beads of Hope. 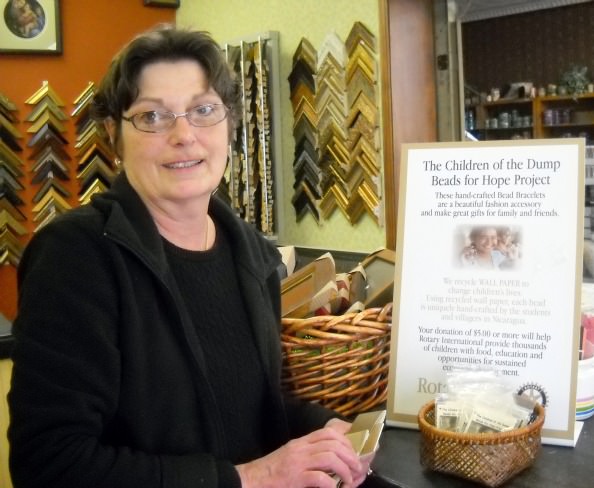 Mary Ray of Campbell’s Paint & Wallpaper stands next to the “Beads of Hope” display in her Dearborn store.

On Trudeau’s most recent trip to visit Chinandega this past November, some of the students taught him how to make beads from wallpaper, which is cut into thin strips and wrapped around a metal rod to form a bead. Each bead is glued, coated with a sealant, dried and strung together with other beads to create bracelets, necklaces and rosaries.

“I wasn’t a very good student,” said Trudeau. “I think I made eight beads in three and a half hours, and they can make up to 30 beads an hour.”

According to Trudeau, the average teacher only earns the equivalent of $100, while bead making provides a sustained income of up to $200 a month.

While lacking skill in bead making, Trudeau knows more about sales and marketing. This is the reason he’s back in Michigan with boxes of “Beads of Hope.” Each box contains 100 beautifully handcrafted and individually wrapped bracelets with descriptions personally signed by the makers.

Campbells Paint and Wallpaper keeps a supply of the bracelets on hand for customers to select from and donate. Donations of a minimum of five dollars each are requested. All proceeds benefit Children of the Dump and educational projects in Nicaragua.

Local school groups have used the “Beads of Hope” for fundraising projects. According to Trudeau, students at the Henry Ford Academy in Dearborn are already at work on distributing and collecting donations for a second box of 100 bracelets.

Dearborn Rotarians Rick Goward, Kerrie Peterson and Sue Surducan, along with other volunteers, also helped to raise $500 by making the beads available during the Club’s annual Santa Snaps workshop at the Wayne County Lightfest.

Ray summed up her feelings about participating and said, “We’ve made a complete circle—from wallpaper of little value to priceless Beads of Hope.”

For more information about Beads of Hope and other Rotary projects in Nicaragua, email Ray Trudeau at [email protected]

Rotary is the world’s first service organization, which was founded by Paul P. Harris in 1905 in Chicago, Illinois. The name Rotary is derived from the early practice of rotating meetings among members’ offices. Today, Rotary has evolved into an international service organization of 1.2 million business and professional leaders in 33,000 clubs worldwide. The Rotary Club of Dearborn is one of 50 clubs in Rotary District 6400 which includes Wayne, Monroe and Lenawee counties in Michigan and Essex County in Ontario. Dearborn Rotary meets weekly at The Fairlane Club in Dearborn. For additional information, visit www.dearbornrotary.org or call 313-278-7233.