DEARBORN, Michigan – The Edsel Ford High School Choir, under the direction of Robert Doyle is one of 17 southeast Michigan high schools to be showcased on the renowned composer Tim Janis’ Celebrate America PBS Special –  slated for Friday, March 9, 2012 at 9:00 PM on Detroit Public Television. 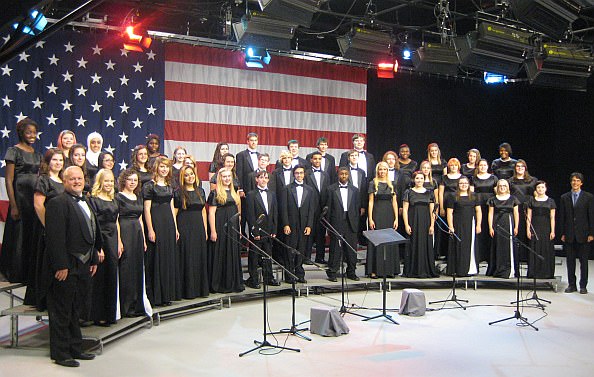 Students from Edsel Ford High School have now joined the ranks of over eighteen thousand of our nation’s most outstanding young performers including celebrities such as Jackie Evancho and Emily Bear. The Celebrate America PBS Special also pays tribute to the U.S. Honor Flag which has traveled millions of miles since 911 (Sept. 11, 2001) to honor our fire, police and military heroes.  Catch it all on March 9th at 9:00 PM on Detroit Public Television.

Celebrate America is an all volunteer program by Tim Janis and his staff. Tim Janis receives no compensation for his time and ressources other than the joy that comes from showcasing music education students and their directors on Public Television. If the public responds well to the upcoming broadcast, Tim Janis will be invited back this fall to tape more schools for Celebrate America 2013.