DEARBORN, Michigan – Russian pianist Gleb Ivanov, praised by the New York Times as “a young super-virtuoso, with musical sensitivity and an appreciation of style to go with the thunder and lightning,” returns to Dearborn’s stage to perform one of the most beloved piano works, Rachmaninoff’s Second Piano Concerto with its grand sweeping gestures and many memorable tunes. This colorful, very romantic concert includes Gershwin’s signature orchestral showpiece, “An American in Paris” and Bernstein’s musical theatre masterpiece “Symphonic Dances from West Side Story.” The concert is on Friday, March 9 at 8 pm at Dearborns’ Ford Community & Performing Arts Center, under the direction of Conductor Kypros Markou, and follows an insightful and humorous free preview of the evening’s music at 7 pm by Jim Walters, a musician and Dearborn music teacher. 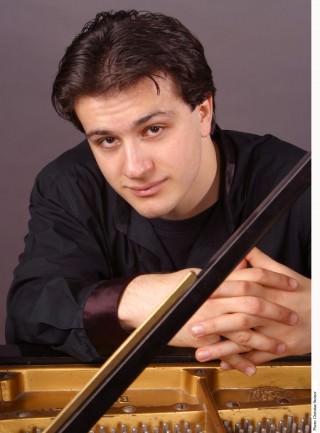 The infectious jazz rhythms of Gershwin’s “An American in Paris” open the program. Inspired by Gershwin’s sojourn to Paris, it evokes the sights and energy of the French capital in the 1920s. In addition to standard symphony orchestra instruments, Gershwin added celesta, saxophones, and automobile horns and even brought back some Parisian taxi horns for the piece’s New York Philharmonic premiere in 1928 in Carnegie Hall. Look for three taxi horns when the Dearborn Symphony performs the piece!

Bernstein’s “Symphonic Dances” continues the program and will have the audience dancing in their seats to “Mambo,” “Cha-Cha,” and “Rumble” and their hearts melting to the one of the most beautiful love songs ever written, “Somewhere,” a longing for a time and place without injustice and hatred.

Rachmaninoff’s Second Piano Concerto provides a breathtaking climax for the concert. This quintessential romantic piece, with its memorable tunes and spectacular pianism, is one of the most popular piano concertos in the modern repertory. Rachmaninoff, unsmiling, stoic and barely moving at the keyboard, became known for his puritanically straightforward approach as a pianist, and for his beauty and warmth of tone. He wrote for his own legendary enormous hands, which could span an interval of a thirteenth. His superior technical prowess made easy work of treacherous passagework, and consequently his own concertos present considerable challenges to pianists.

Spellbinding Russian pianist Gleb Ivanov brings heartfelt passion to Rachmaninoff’s sensuous Concerto. “Eerily like the ghost of Horowitz, Ivanov engulfed the keyboard, rattling the rafters and thrilling the audience. His talent is larger than life,” wrote The Washington Times. Already well known as a virtuoso pianist in Russia, having played with the Moscow State Orchestra, at the Great Hall at the Moscow Conservatory, and at the Kremlin, pianist Gleb Ivanov won many important prizes in Moscow and Kiev. In 2005, he won the Young Concert Artists International Auditions in New York, which launched his career in America. In recognition of his impressive achievements, Ivanov was honored with the 2010 Michaels Award of Young Concert Artists to perform at Lincoln Center’s Alice Tully Hall. Ivanov has had frequent re-engagements, including concerts in Paris and across the United States.

Lodging for Mr. Ivanov is courtesy of The Dearborn Inn-A Marriott Hotel; his appearance is made possible in part by Young Concert Artists. Tickets ranging from $15 to $30 in balcony, box and lower level are available by phoning the Symphony at 313-565-2424 or at the theater box office at 313-943-2354. Visit dearbornsymphony.org for more information. Contact the Symphony office for group discounts.