You are here: Home / Arts / The Most Happy Fella On Stage in Dearborn March 30,31

DEARBORN, Michigan – Friends of the Opera of Michigan (FOTO or F.O.T.O.) has assembled an exciting and talented cast for its upcoming production “The Most Happy Fella,” on Friday, March 30 and Saturday, March 31 at 8 pm – in the Michael A. Guido Theater of Dearborn’s Ford Community & Performing Arts Center.

The “Most Happy Fella” story centers on Tony, an older man in love with a much younger woman and a case of mistaken identity. The musical, described by theater critics as a “missing link between Broadway and opera” was written by Frank Loesser and first opened on Broadway in 1956. Over the years it has experienced numerous revivals. 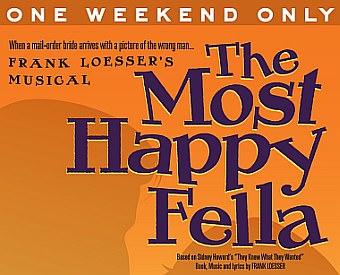 F.O.T.O. Artistic Director Quinto Milito, who will perform the lead role of Tony, has tried for more than 20 years to bring the production to the stage in Dearborn. Milito, a baritone, graduated from the famed G. Rossini Conservatory of Music in Pesaro, Italy and made his operatic debut at the Spoleto Festival in Italy. Considered the true “Verdi baritone,” he has appeared with many symphony orchestras.

Katherine Kujala plays the part of Rosabella, the object of Tony’s affection. Kujala has performed with the Arbor Opera Theater, the Comic Opera Guild of Ann Arbor and was in the world premiere performance of Obsession at the Croswell Opera House.

The role of Marie is performed by Elizabeth Mitchell. Mitchell has performed with Ohio Light Opera, Michigan Opera Theater and has numerous other credits to her name. She is making her debut with F.O.T.O. in this performance.

Annie Klark, a regular performer with Michigan Opera Theater, will perform the role of Cleo. Klark’s other performances have included the Toledo Opera and JET Theater. A graduate of the University of Michigan, she also works as a children’s theater director and teacher.

Tickets for “The Most Happy Fella,” priced at $29 and $24 are on sale now at the Ford Community & Performing Arts Center Box Office, 15801 Michigan Avenue, Dearborn. Box office hours are Tuesday through Saturday, 11 a.m. – 7 p.m. or one hour prior to scheduled performances.

Contact the box office at 313-943-2354 for phone orders or order online at: www.dearborntheater.com. MasterCard, Visa and American Express are accepted.

“The Most Happy Fella” is presented through special arrangement with Music Theater International (MTI).