You are here: Home / Business / Tom Lewand of Detroit Lions to Speak at Chamber Breakfast

DEARBORN, Michigan – Tom Lewand, president of the Detroit Lions, will be the keynote speaker at the Dearborn Chamber of Commerce’s Business Builder Breakfast, Wednesday, May 16, 7:30 am at the Doubletree Hotel Detroit/Dearborn, 5801 Southfield Service Drive, Detroit. The event is sponsored by Oakwood Healthcare System. 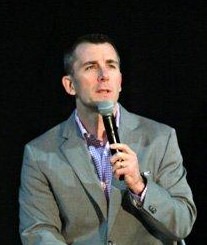 The Detroit Lions 2011/2012 season was a cavalcade of historic moments and emotional highs. While the season may have ended in the first round of playoffs, fans were still treated to numerous nationally televised games this year, and this Lions unit proved they were not the same pushovers from years prior. They became a force in the NFC and a likely fixture in playoff race for the foreseeable future. Working alongside General Manager Martin Mayhew and Head Coach Jim Schwartz, Lewand is leading one of the NFL’s most improved teams.

“We want business owners and executives to be motivated and inspired by comeback stories such as the Detroit Lions,” said Chamber President Jennifer Knott Giering. “Lewand has proven to be a creatively aggressive business force. In addition to the transformation of the Lions’ business operations, he has helped position Ford Field as a cornerstone in the area’s urban renewal and revitalization efforts.”

Since taking the helm, Lewand continues to evaluate and review opportunities to grow the team’s operations to impact it’s ability to win on the field. In 2010, the team sold out seven of eight home games and introduced numerous fan-friendly and family-oriented ticket options. Overall attendance in 2010 increased 14 percent, the largest increase by any NFC team. Detroit was one of only two teams in the NFL to experience a double-digit increase in ticket sales. Under Lewand’s guidance and direction, Ford Field has been host to Super Bowl XL (2006); NCAA Men’s Basketball Final Four (2009); NCAA Men’s Hockey Frozen Four (2010) that not only set NCAA Frozen Four records but world indoor hockey records as well.

The Dearborn Chamber offers this breakfast series as an opportunity for members to engage with newsmakers and key opinion leaders who make significant impact on the business community. The Business Builders Breakfast in May is the first of these breakfasts scheduled for 2012. Previous speakers included Ford Motor Company’s Alan Mulally and U of M Athletic Director David Brandon. Individual tickets are available ($30 for members; $35 for non-members) as well as corporate tables ($400) by going to www.dearbornchamber.org.