DEARBORN, Michigan – Pastor Terry Jones is back in Dearborn today to exercise his 1st amendment rights of free speech, and freedom of religion – by speaking in front the Islamic Center of America mosque on Ford Road in Dearborn, Michigan. The rally was scheduled to occur from 1:00 to 3:00 pm today.

Various groups (including BAMN) were gathering near the mosque this morning in a counter protest.

Earlier this week  “Detroit Federal District Judge, Denise Page Hood, granted a motion for an Emergency Temporary Restraining Order and enjoined the City of Dearborn from requiring Pastor Jones to sign a Hold Harmless’ agreement before approving his application to speak in front of a mosque on Saturday, April 7th” – according to a statement from the Thomas More Law Center in Ann Arbor, Michigan. 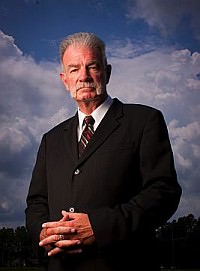 “Islam is the greatest threat to our national security.  The Muslim community refuses to integrate, instead they demand and push their religion, their rituals, upon us and upon our society.  Dearborn is a prime example of this along with many others around the nation”  according to Dr. Terry Jones – in a press release promoting his visit to Dearborn.

Jones press release continued with a laundry list of  examples, claiming:  “the Muslim community is trying to push their agenda upon us with the help of organizations such as CAIR and MSA, with the help of political correctness, with the help of people who are unwilling to actually take a stand. As Islam continues to push its agenda using threats, parts of America are beginning to give in. Changes are being made at the expense of taxpayers.”

The press release continues:  “On April 7, we will be in Dearborn, Michigan in front of the Islamic Center of America to take a stand for America.”

The press release provided other examples, including an item stating: ” University of Michigan in Dearborn installed two foot baths which cost taxpayers $100,000.”

Dearborn’s Arab American News challenged many of the statements made by Jones in an article entitled:  Fact Checking – Terry Jones Worst Enemy

Pastor Jones also stated: “We are challenging Imam Al-Qazwini of the Islamic Center of America to work with us on obtaining the release of Iranian Pastor Youcef  Nadarkhani.”

Iranian Christian Pastor Youcef Nadarkhani has been charged, convicted and sentenced to death for apostasy — for leaving Islam and becoming a Christian. When Iranian officials demanded that he recant his faith in Jesus Christ or die, he responded, “I cannot.”  He has been illegally imprisoned and separated from his wife and two boys since 2009.   It was reported earlier this week, that Pastor Youcef’s son was able to visit him in prison.

Jones  “called for a worldwide burning of the Koran on April 28”  if Pastor Youcef Nadarkhani isn’t freed.

“I’m asking the imam of the Islamic Center here in Dearborn to work with me to free Minister Youcef,” said Jones  “If he isn’t freed, I will ask the world to burn the Koran in protest starting at 5 p.m. on April 28th in Gainesville, Fla.”

In the hours leading up to his planned rally in front of  the Islamic Center of America, Dr. Terry Jones and his organization Stand Up America Now have issued a series of tweets, including:

“They (the City of Dearborn) cannot pull a ‘Pontius Pilate’ and just wash their hands (of any wrongdoing).” ~ 6-Apr-2012

“Approximately 70% of Muslims in the US have not read the Koran. We suggest that they read it and find out exactly how dangerous it is.” ~ 6-Apr-2012