The ceremony was hosted by Patricia E. Mooradian, President of The Henry Ford, where the event took place. The ceremony celebrated the collaborative milestone marking the beginning of the construction of this $28.2 million federally-funded station, to be built at 20201 W. Michigan Avenue, west of the Southfield Freeway at the entrance to Dearborn’s west downtown.  (See story part 2 for larger images.)

The ceremony was held at Greenfield Village within The Henry Ford because the station will be built adjacent to this national Historic Landmark site and will provide improved access to the visitor attraction for passengers arriving by train.  At the April 10 launch, invited guests gathered at the historic Smiths Creek Depot inside Greenfield Village to hear details about the dramatic progress expected, and to receive thanks for their support. 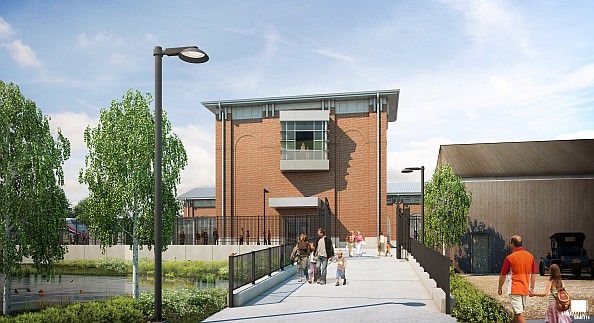 The Vision for an Intermodal Station

The pedestrian-friendly Dearborn Intermodal Passenger Rail Station will serve as a rail gateway to Dearborn and southeast Michigan. The important transportation link will allow thousands of passengers per year to make connections to Amtrak’s Wolverine service that extends from Pontiac to Chicago; as well as to SMART, DDOT, Greyhound and charter buses; corporate and hotel shuttles; taxis and personal vehicles.

The station is positioned to support the eventual operation of the Detroit to Chicago High Speed Rail Corridor, which already has seen progress in western Michigan.

The station’s proximity to the Rouge River Gateway Trail on the north side of Michigan Avenue in Dearborn should prove popular to pedestrians and bicyclists and provide easy access to the campuses of the University of Michigan-Dearborn and Henry Ford Community College. 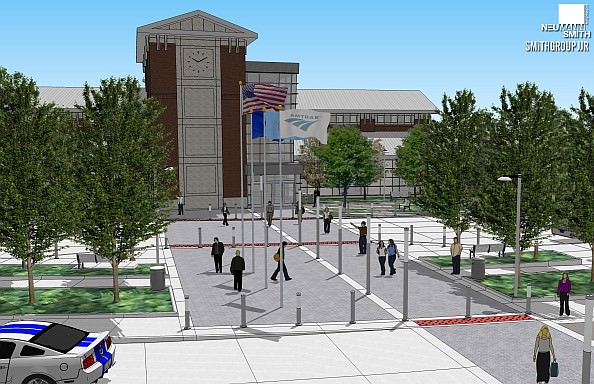 Preliminary work began in March with utility alterations on the construction site and completion is expected by fall 2013.  As the construction progresses, people traveling down Michigan Avenue will see the intermodal station evolve from a bare footprint to a beautiful two-story brick and glass structure surrounded by ponds and appealing landscaping.

The 16,000-square-foot intermodal station will offer amenities like free WI-FI and bicycle racks. Also incorporated inside will be exhibits by the City of Dearborn, Ford Motor Co., The Henry Ford, Pure Michigan and others. The site at 20201 Michigan Avenue had been previously used for the storage of vehicles.

Beyond jobs for those employed in the construction and the operation of the intermodal station, the project is expected to bring dollars from commuters and tourists, be a catalyst for local business growth and lay the groundwork for future economic development.

More than 1.5 million tourists visit The Henry Ford each year. The additional entrance to The Henry Ford will allow visitors to more easily arrive by train for their historic adventure. The intermodal station will support what’s expected to be an influx of tourists and provide safe, convenient and fast travel options for them.

The City of Dearborn hopes to enjoy a boost to local business based on what a 2012 Michigan State University study says is a rise in Michigan tourism, especially from out of state visitors. Travel spending jumped 7.8% last year, with another leap forward expected in 2012.

“This project is part of a larger strategy to increase the number of potential customers coming to Dearborn every day. Increasing the customer base sustains existing businesses and attracts new activity and investment,” said O’Reilly.

Dearborn is courting further economic possibilities with transit oriented development (TOD). Research shows people want to live and work near mixed-use residential and commercial areas close to public transportation and, because they do, property values can be strengthened.

Dearborn’s $28.2 million Intermodal Passenger Rail Station is fully funded through the federal American Recovery and Reinvestment Act of 2009, which allocated the money to the Federal Railroad Administration (FRA) High-Speed Intercity Passenger Rail Program. The FRA directed the money to the Michigan Department of Transportation for the building of the City of Dearborn’s station.  President Obama announced the federal high speed rail initiative award in January 2010.

Advocating for Dearborn’s intermodal station were Senator Debbie Stabenow, Congressman Dingell and other elected leaders. The success of the intermodal station project is attributed to multiple stakeholders who partnered with the City of Dearborn to develop the project over a 12-year period of study, site selection, environmental assessment and preparation. Among the partners are the FRA, MDOT, Southeastern Michigan Council of Governments, The Henry Ford, the University of Michigan-Dearborn and Ford Land. Dearborn’s City Plan Commission approved land use for the intermodal station and the Dearborn City Council approved the purchase of the seven-acre site from Ford Land through the use of federal funds.

The passenger bridge over the tracks adjacent to The Henry Ford and the tower structures will be aligned on an axis with the historic clock tower of The Henry Ford Museum. These elements will help define the sense of place unique to the Dearborn station. Neumann/Smith Architecture designed the station along with the consultant design firms of SmithGroupJJR (civil engineering and landscape architecture), Quandel Consultants (rail engineering), KMI (rail station consultant architects), Penhale & Yates (structural engineers), DiClemente Siegel Design (mechanical and electrical engineers) and Somat Engineering (geotechnical engineers).

Construction for the station is being managed by Tooles/Clark, which is a joint venture of Tooles Contracting Group of Detroit and Clark Construction Company of Lansing.

The building and site will be sustainably designed to meet the standards of the U.S. Green Building Council’s (USGBC) Leadership in Environmental and Energy Design (LEED) program. The station will include bicycle racks; a metal roof with solar collectors; energy efficient lighting; geo-thermal heating and  cooling; and storm water management features, such as rain gardens and bioswales. It is expected these features will have the added benefit of reducing station operating costs. 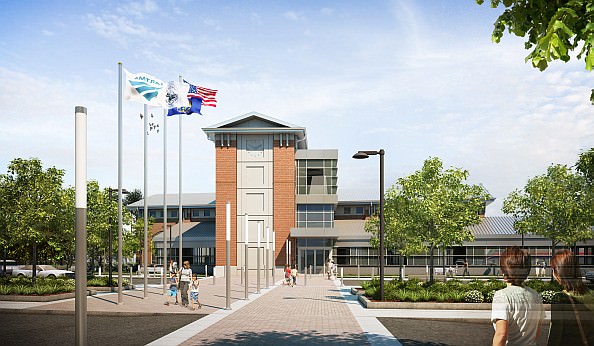 Exit and entry drives into the intermodal station will be engineered to make access from Michigan Avenue easy. A center island will be added to Michigan Avenue in order to accommodate a new safe pedestrian walkway.  Additional traffic signals will be installed as well on Michigan Avenue. During the construction, infrequent lane closures on Michigan Avenue may take place, but for the most part, traffic will proceed as usual.

Amtrak will lease the facility from the city for 20 years and will be in charge of the operations of the station. Dearborn’s current Amtrak train station, built four decades ago south of Michigan Avenue and east of the Southfield Freeway, will be re-utilized.