DEARBORN, Michigan –  Saturday, May 5th is Free Comic Book Day in North America.  This year  Green Brain Comics in Dearborn will feature more guest comic creators then ever before, a workshop area, and lot’s of ways to get FREE specially marked comic books.​

Free Comic Book Day is a single day – the first Saturday in May each year – when participating comic book shops across North America and around the world give away comic books absolutely FREE* to anyone who comes into their stores.  (*Some limitations apply.) 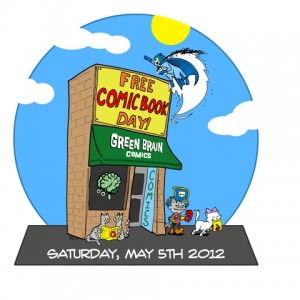 Green Brain Comics is proud to announce our biggest Free Comic Book Day Celebration ever! “It’s outgrown the store!” says event coordinator Dan Merritt “So we’re planning an expansion into the parking lot and essentially doubling the fun!”
​
This year Green Brain Comics is partnering with Oakwood Healthcare Systems, the East Dearborn Downtown Development Authority and Kids Read Comics to provide a huge tent to house a host of local comic creators, local vendors, and a comic workshop area for kids of all ages.
​
And you get free comics! Inside the store, Green Brain Comics will be giving away thousands of comics printed specifically for Free Comic Book Day.Everyone who comes in gets the choice of three, from a selection of over three dozen different titles. Plus, you can get up to four more by donating non-perishable canned food (for Gleaners Food Bank), used cell phones (for Cell Phones for Soldiers), gently used books (for Friends of the Library Dearborn) or just for appearing in costume.
​
There will be live music, dj’s, door prizes and even a photo booth. So don’t miss the biggest Free Comic Book Day Ever at Green Brain Comics!
​
Free Comic Book Day kicks off at 10am and runs until 8pm Saturday, May 5th at Green Brain Comics, 13210 Michigan Ave. East Downtown Dearborn. Call 313-582-9444 or got to www.greenbrain.biz for more information.