You are here: Home / Buzz / Pie Fight Erupts Between Mayor and Officials at Cancer Event

DEARBORN, Michigan – Five Dearborn officials took pies in the face for a good cause on Saturday at the annual Relay for Life event that benefits the American Cancer Society.

Team Dearborn, one of several teams participating in the day-long Relay on the grounds of the Ford Community & Performing Arts Center, convinced the five officials to be part of “Four Pies and a Poncho.” The premise was that the officials’ names would be posted by donation jars and the one who received the most in donations would get the poncho – and the others would get the pies, which they would throw at the “winner.” (See more action photos in Pie Fight part 2.) 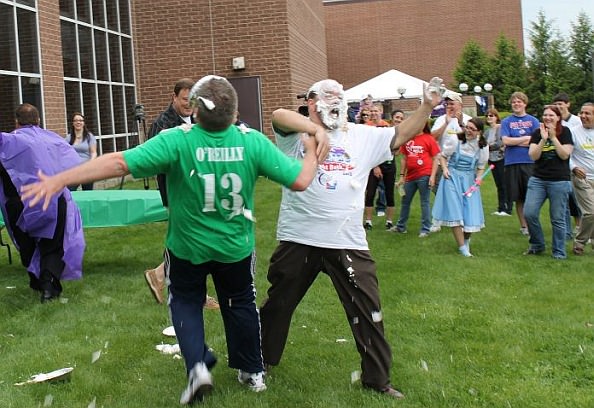 Despite wearing a Team O’Reilly T-shirt in an apparent attempt to get a measure of pie-slinging mercy from the Mayor , Wayne County Commissioner Gary Woronchak was hit with a pie by Mayor John B. O’Reilly, who himself had already been creamed in the fund-raising event at Relay for Life. (photo by Margaret Pedenelli)

More than $1,200 in donations came in throughout the day, with Whiston leading the pack with nearly $440 from those who wanted him to take the pie-ing.

The participants deviated from the plan as the pie-throwing commenced, however.

Woronchak was first in line and creamed Whiston with a pie to start things off. But from there, a brief pie-melee ensued, with each of the five winding up facing a bit of messy – yet strangely tasty, according to Woronchak – few moments of mayhem.

Woronchak himself, despite wearing an O’Reilly T-shirt, was pie-whacked by the Mayor.

“I assumed that wearing a pro-mayor shirt might buy me a measure of mercy from the Mayor, if I were to be selected to get hit with the pies,” Woronchak said. “I was incorrect.” 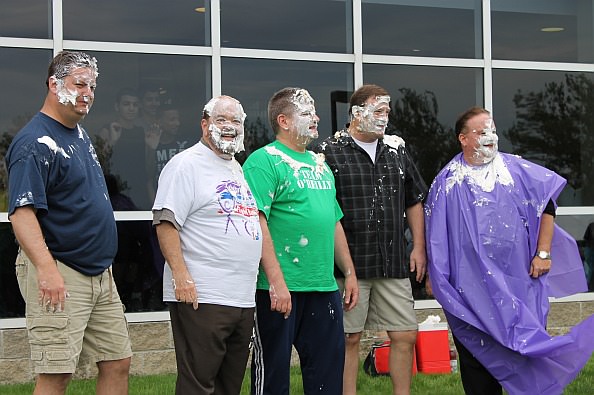 Debbie Malyn, co-captain of Team Dearborn at Relay for Life, said, “We’re extremely grateful to our city leaders for being good sports for such a great cause.”