DEARBORN, Mich. – City of Dearborn and Milford Township officials on June 16 celebrated along side Camp Dearborn guests during the grand opening of eight modern cabins at the recreational facility.

Dearborn Mayor John B. O’Reilly, Jr. and City Council members were joined by Milford Township Supervisor Donald Green to mark the completion of the cabins, which are designed to offer a more contemporary option for vacationing in the campground. 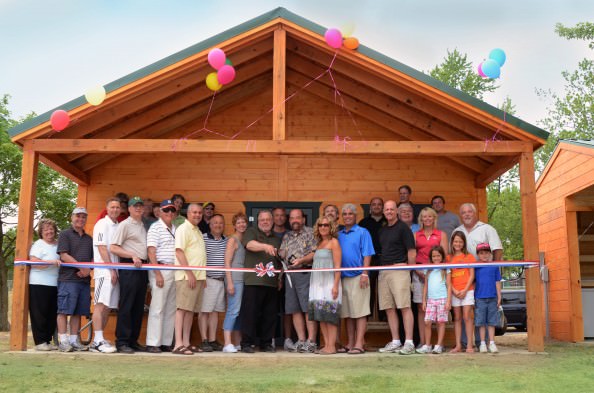 The cabins, custom-designed and constructed by Legendary Timberworks of Novi, are positioned in a single row overlooking one of the Camp’s lakes. Each cabin has a complete bathroom with shower and an additional stainless steel sink for dishwashing, as well as a garbage disposal.

The cabins include built-in beds to accommodate six people; two standard twin bunks and one standard full-size bed, each with a foam mattress.

The sleeping comfort of the new cabins is enhanced by five double-hung Anderson window/screen combinations and a ceiling fan.

The camper-kitchen unit stands outside the cabin, similar to the existing tents and cabins in TV1. Like other camping units, the cabins are constructed on a cement base and equipped with a picnic table, grill and firepit.

Customers eager to try the new cabins had begun booking reservations before they were even completed. Occupancy was said to already be at 55 percent capacity for the summer prior to the opening.

To reserve a cabin, call the Milford Camp Office at 248-684-6000. In-season fees for the cabins will be $660 for weekly rentals ($94 per night). Daily rentals will also be available at $110 per night with a minimum stay requirement.