DEARBORN, Michigan – Ethan Bortnick, the 11-year-old musical sensation, who has headlined more than 100 live shows across the globe, and has shared the stage with legendary artists such as Beyoncé, Celine Dion, and Justin Bieber, is headlining his “It’s All About Music” tour this summer with a kick off concert at Dearborn’s Ford Community & Performing Arts Center, July 29. 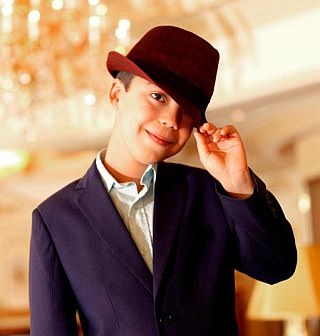 The 23-city national tour kicks off July 29th and runs through September 2. Tickets are available at ethantickets.com, Ford Community & Performing Arts Center Box Office (Tuesday-Saturday, 11am-7pm), ticketmaster.com, dearborntheater.com or by phone at 800-745-3000 or 313-943-2354.

Ethan was recently certified by the Guinness Book of World Records as The World’s Youngest Solo Musician to Headline his own Tour. The new summer tour was inspired by Ethan’s latest single, “It’s All About Music,” which will be available on iTunes and on Ethanbortnick.com later this summer.

Ethan’s dynamic set features his unique take on several rock and pop classics as well as original material. The show highlights Ethan’s extraordinary musical talents and will guarantee to have kids and the entire family on their feet singing and dancing.

The KIDZ BOP Kids, the face and voice of KIDZ BOP, the #1 music brand for kids ages 5-12 in the U.S., will be the opening act for the show. Since its launch in 2001, KIDZ BOP has sold more than 12 million albums and has earned one platinum and nine gold certifications. The latest volume in the best-selling audio series, KIDZ BOP 22, was released on July 17th and features Ethan on piano for KIDZ BOP’s version of “Set Fire To Rain.”

Ethan also has a presence on KIDZBOP.com, the leading safe social networking and video sharing site for kids and tweens, where he has over 1.2 million fans. Ethan is the host of his own popular web series on KIDZBOP.com, “The Ethan Show.” All new clips highlighting his adventures of the tour will debut later this summer.

Ethan’s tour-mates, The KIDZ BOP Kids, a group of talented performers from across the country – Steffan, Elijah, Eva, and Charisma – will also be joined by RCA Records recording artist and the 2011 KIDZ Star USA Grand Prize Winner, Kiana Brown. After 2 million votes, Kiana beat out nearly 50,000 contestants to win a recording contract from RCA Records and a starring role in the KIDZ BOP 21 TV commercial and music video.

Bortnick, a Hollywood, Florida native has headlined over 100 shows across the globe, drawing rave reviews from audiences. In 2010, he created and hosted his own award-winning nationally televised concert special for PBS. Beyond his amazing talent as a musician, Ethan has made a name for himself as one of the world’s youngest philanthropists. Through his appearances at benefits and charity galas, he has helped raise more than $30 million for non–profits around the world. These summer concerts are no exception, and a portion of ticket sales and merchandise sales will go to Children’s Miracle Network Hospitals.

KIDZBOP.com is the leading safe social network and video sharing site for kids and tweens with one million registered members. The website allows kids to express themselves—as themselves—through unique online applications and proprietary functionality. Kids can star in video-based “Web Shows,” challenge each other to “Super Contests,” and build “Fan Pages” as part of KIDZBOP.com’s fun features. An introduction to social networking, the site also features a profile page for each member where they can chat with each other via a safe text messaging system. KIDZ BOP’s expert moderators have screened more than 35,000 hours of video content and nearly half a million photos before they were published to the site. KIDZBOP.com is also home to America’s biggest online talent search for kids 15 and under, KIDZ Star USA.