DEARBORN, Mich. – The Dearborn Allied War Veterans Council and a variety of Korean-American organizations will commemorate the armistice that stopped the Korean War with a ceremony at 6 p.m. Friday, July 27 in the auditorium of the Henry Ford Centennial Library, 16301 Michigan Avenue, Dearborn. 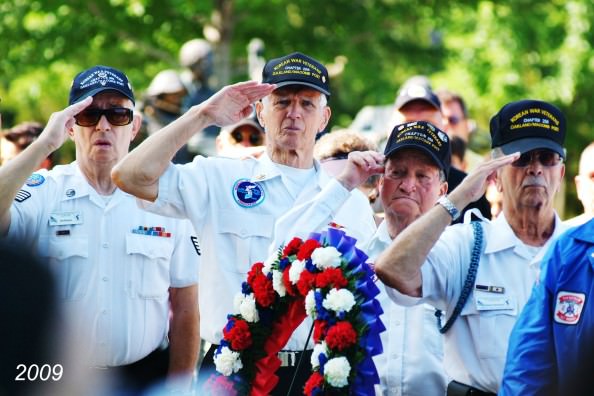 The Dearborn Allied War Veterans Council and committee chair John Ruselowski, with support from the City of Dearborn, will present a ceremony marking the anniversary of the armistice of the Korean War at 6 p.m. Friday, July 27 at the Henry Ford Centennial Library auditorium. This photo is of the 2009 event, held in a different location. Korean War vets salute the flag during the emotional ceremony, which honors those who served and those who perished in the three-year conflict.

The public is invited.The ceremony will commemorate the anniversary of the beginning of the Korean War and the 59th year of the signing of the armistice that ended the fighting.

John Ruselowski is chairman of the organizing committee and is a Korean War veteran.

“We will pause to pay respect to those Korean veterans who gave the ultimate sacrifice, including 26 men from Dearborn, and all those who served during the Koran War,” he said.

The colorful and moving ceremony will include remarks by Dearborn Mayor John B. O’Reilly, Sen. Carl Levin and State Rep. George Darany.

Also participating are Consul General of the Republic of Korea Chul Huh and two representatives of the Korean American Committee of Metro Detroit: Chairman of the Board of Directors Jong Dae Kim and President Young Haw Chou (Yang).

Serving as bell ringer is Ryang Hong, who was awarded the South Korean Medal of Honor for his military service.

Following the ceremony at approximately 7 p.m., a public reception will be at Pvt. Joe Lyskawa Post 7546 VFW, 6828 Waverly in Dearborn Heights.

Note this is a change from the previously published location. The move to a bigger facility was made due to the enthusiastic response anticipated. Korean and American food will be served.