You are here: Home / Community / The Henry Ford Extends Hours for Final Boarding of Titanic

DEARBORN, Michigan – Don’t miss your last chance to board Titanic: The Artifact Exhibition at The Henry Ford before it sets sail on September 30. Guests looking to visit the Exhibition either for the first, or one last time, will have the opportunity to do so during special extended hours (this week)  from 9:30 a.m. to 9 p.m, until September 30th at Henry Ford Museum. 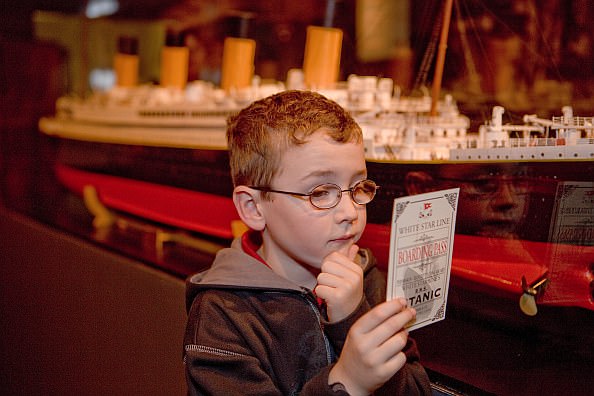 A young boy studies and authentic replica of a Titanic boarding pass at the Titanic exhibit.

The 10,000 square-foot exhibition features more than 300 artifacts – 250 of which have never been displayed in Michigan. Guests seeing the Exhibit for the first time will be quickly taken back in time to 1912 as they walk through extensive room re-creations, get their photos taken near the full-scale replica of the Grand Staircase and learn about passengers on board who had local ties to Michigan.

As visitors board the newly redesigned and expanded exhibition they will receive a replica boarding pass of an actual passenger aboard Titanic. They then begin their chronological journey and “travel” through the life of the Titanic—from the ship’s construction, to its on-board passengers, its ill-fated voyage and the amazing artifact rescue efforts that involved divers returning to it in recent years.

About The Henry Ford
The Henry Ford, in Dearborn, Michigan, is the world’s premier history destination and a National Historic Landmark that celebrates American history and innovation. Its mission is to provide unique educational experiences based on authentic objects, stories and lives from America’s traditions of ingenuity, resourcefulness and innovation. Its purpose is to inspire people to learn from these traditions to help shape a better future. Five distinct attractions at The Henry Ford captivate more than 1.5 million visitors annually: Henry Ford Museum, Greenfield Village, The Ford Rouge Factory Tour, The Benson Ford Research Center and The Henry Ford IMAX Theatre. The Henry Ford is also home to Henry Ford Academy, a public charter high school which educates 485 students a year on the institution’s campus and was founded in partnership with The Henry Ford, Ford Motor Company and Wayne County Public Schools. For more information please visit our website thehenryford.org.

RMS Titanic, Inc. and Premier Exhibitions, Inc. (NASDAQ: PRXI)
Titanic: The Artifact Exhibition is produced by RMS Titanic, Inc. a wholly owned subsidiary of Premier Exhibitions, Inc. RMS Titanic, Inc. is the only company permitted by law to recover objects from the wreck of the Titanic. The Company was granted Salvor-in-Possession rights to the wreck site of Titanic by a United States federal court in 1994 and has conducted eight research and recovery expeditions to Titanic rescuing more than 5,500 artifacts. The Company recently completed its eighth and most ambitious mission to the wreck site of Titanic in summer of 2010. For the first time in history, RMS Titanic, Inc. alongside the world’s top oceanographic agencies set out to map the entire wreck of Titanic with the hopes of raising the Ship virtually for future generations.