You are here: Home / Community / Ella Gets a New Thumb

DEARBORN, Michigan – Ella Ballheim, a four year old girl from Dearborn, is happy about her new thumb.  Ella was born with a limb deformity. “She would look at my hand or her dad’s hand and say “Why I not have a tumm?”

All it took was one picture of two-year-old Ella, for David and Deanna Ballheim of Dearborn to fall in love with her. The couple, who were eager to adopt Ella from China, had their wish come true when they became Ella’s parents in 2010.

They love their daughter unconditionally and made it a priority when they arrived from China to have her evaluated by her local pediatrician. Ella was born with a limb deformity and their local doctor recommended that Ella be seen at DMC Children’s Hospital of Michigan for a genetic evaluation and referral to Joseph Failla, MD, pediatric orthopaedic hand surgeon. “Her right arm was shorter than her left arm and it is bent at a 45 degree angle making it almost nonfunctional,” explains Deanna. She also has a nubbin on her right thumb instead of a fully functioning thumb and did not have a thumb on her left hand. 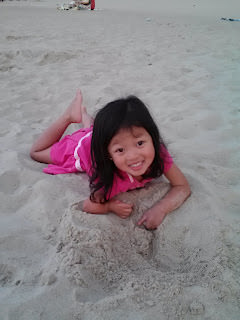 Ella Ballheim – at the beach

Deanna says it was heartbreaking at times when Ella would ask in her toddler language why she couldn’t do some things that others could. “She would look at my hand or her dad’s hand and say “Why I not have a tumm?” “Why I not use snip snips (scissors)?” “Why I not pick tings up wike dis?” So, we explained to her the best we could and she said that she would like a “tumm.”

Although Dr. Failla suggested waiting until she was at least four-years-old to have surgery, he would soon make her wish come true when he suggested that a procedure called pollicization could dramatically improve her hand function on her left hand. “The surgery is pretty involved but it makes such a difference in improving the function of the hand,” says Dr. Failla. “It involves moving the index finger with its nerves and blood vessels attached to position it where the thumb should be, and rearranging the tendons and muscles and surrounding bone so the index finger would look and work like a thumb,” he says. Instead of having four fingers and no thumb, she would have three fingers and one thumb.

In May, 2012, the surgery was performed and the difference was profound according to Deanna. Ella now has the ability to use her thumb like others as a pincher to grasp things. This means she can pull things up, write and draw better and use the computer much more efficiently. “We are so thankful to Dr. Failla for his compassion and treatment that has made such a difference for our daughter.”

Dr. Failla, who received a pewter piece with small hands and thumbs as a special gift from Ella and the Ballheim family, says Ella may need follow up care as she grows, but the surgery was considered a success.

Ella now loves to dance and swim. “One of her favorite sayings is thumbs up”, says Deanna. Truly an expression most take for granted, but certainly not the Ballheim family.

For further information on services available through the Orthopaedics Department at DMC Children’s Hospital of Michigan, please call(313) 745-5227 or visit www.childrensdmc.org/orthopaedics.