You are here: Home / Featured / Jane Wilson Says Vote ‘No’ on Proposal 2

Letter to the editor — Proposal 2 represents an attempt by government union bosses to destroy the Michigan Constitution, hold employers and legislators hostage, and change and repeal as many as 170 of Michigan’s laws. Michigan’s attorney general is warning that it would eliminate the law requiring safety rules for school bus drivers and could prohibit schools from firing employees with criminal records.

As Gov.  Snyder has said, “Prop 2 would amend our constitution to change the way bargaining would work in our state. It could lead to unlimited wage increases and early retirements with lavish pension—all at taxpayer’s expense.” Elected representatives would be legislatively powerless to stop them…and “we the people” would lose our voices and power to govern.

That’s pretty scary, considering the fact that state workers’ average annual compensation, including benefits, is pegged at $85,0676 in 2009—more than twice their private sector counterparts’ pay and benefits at ($39,986). On top of this, the number of employees who are unionized is 5.5 times the number of workers in the private sector! 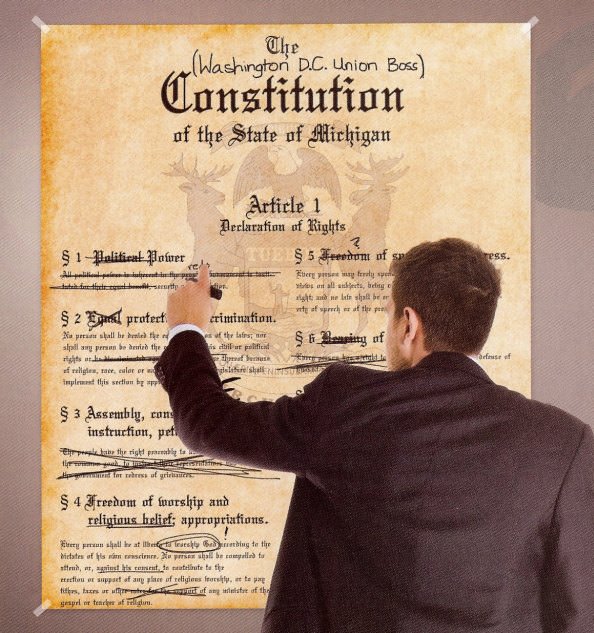 Proposal 2 states it would grant public and private employees the constitutional right to organize and bargain collectively through labor unions. But they already have these rights!

Unlike the federal government, states are required to balance their budgets, and Michigan legislators have made great strides in this area, starting by reducing their own personal salaries and budgets, getting control of deficits and out-of-control spending.

Prop. 2 would give government labor unions the ability to repeal many of the reforms that have helped Michigan start to recover. In fact, it would amend up to 18 sections of the state constitution!

We don’t need our wonderful state constitution amended by and for less than 1% of Michigan citizens! Vote NO on Proposal 2.