DETROIT, Michigan – “We die too young and we live too hard to let our vote be disrespected,” said the Rev. David Alexander Bullock of Greater St. Matthew Baptist Church.

Bullock was one of 20 who gathered in front of the Fisher Building in Detroit yesterday at noon to protest the Detroit Public School District Emergency Financial Manager’s refusal to vacate his office after the law was repealed on Nov. 6. 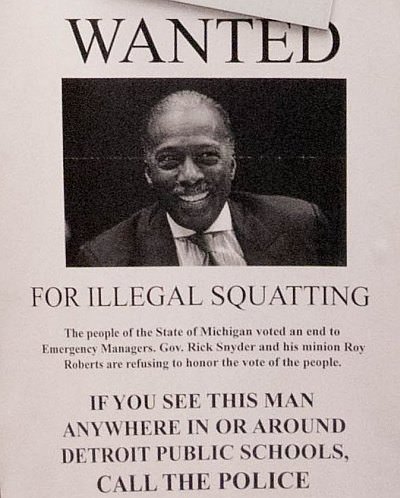 Public Act 4, which instated the Emergency Financial Manager (EFM), Roy Roberts, has received a lot of criticism in and around the city of Detroit. This past Tuesday, 2,365,413 voters repealed PA 4, which was 52.7% and 82% of Detroiters. Of 83 counties, 77 voted no on Proposal 1.

After the election, the state temporarily repealed PA 4. Attorney General Bill Schuette stated that the vote only repealed PA 4 but reinstated Public Act 72 of 1990, allowing emergency managers to continue working with limited powers. According to Schuette, PA 72 is permanently reinstated. However, several municipal leaders are stating that this position has no legal foundation and are in the process of filing lawsuits to challenge this.

Gov. Snyder has drafted a bill to pass a new legislation to further the EFM law and is suspected to broaden the position’s powers.

Roberts claims that he will continue to serve as the EFM, according to PA 72. The public’s concern with this is that Roberts will turn Detroit schools over to the Education Achievement Authority (EAA). The EAA is a new statewide system in charge of the operation of schools.

“It will first apply to underperforming schools in Detroit in the 2012-2013 school year and then be expanded to cover the entire state.”

What the site doesn’t state is that Detroit Public Schools (DPS) transferred to EAA control will be forced to spend less money per student than the EAA district. Unlike the EAA, the remaining schools left in DPS will still have to pay the $500 million debt, which diverts money away from the students.

Teachers currently working at schools that will transfer into the system are at risk for losing their jobs since the EAA states that the “school may undergo a change in leadership and a shift in teachers and staff.” It also states that in order to be considered to keep their positions, teachers will need to reapply. 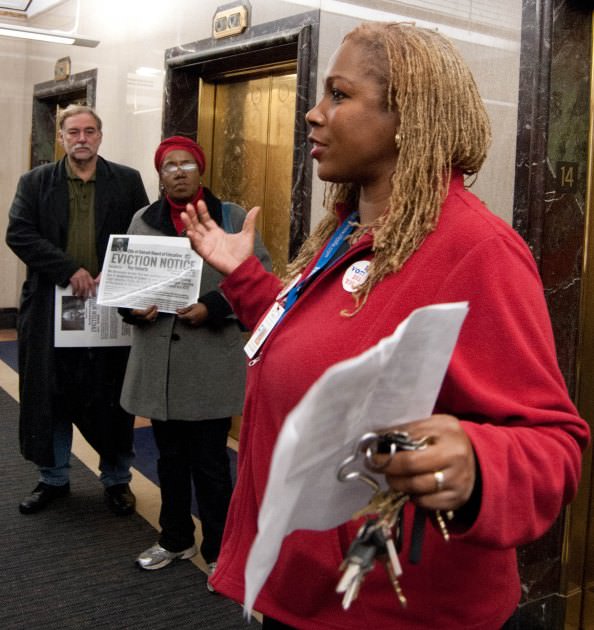 Most of the protesters were extremely vexed over losing voting rights and now worrying about what will happen with the school districts and jobs.

“Many veterans who have served our nation are now serving our children […] and are suffering from layoffs,” said Crystal Bonner, a Detroit Institute of Technology teacher at Cody High School.

The group proceeded up to the 14th floor of the Fisher Building and posted “Wanted for Illegal Squatting” flyers around the elevator lobby outside of Roberts’ office. After a few speeches and discussions, Bullock decided to close the event:

“They tried to tell us we didn’t have the right to vote but we got it on the ballot. Voter suppression became voter determination. […] We will not let democracy be destroyed in Detroit. It’s not a black thing or a white thing. It’s the right thing. […] Let the signs of our presence strike fear to those who suppress us.”