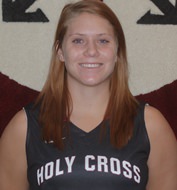 A 2009 Divine Child High School graduate, where she received accolades making the All-Catholic, All-Conference, All-City, and All-State teams, Malinowski began her collegiate career at Davenport University for the 2009-2010 basketball season.

Upon her arrival to Holy Cross, Malinowski’s presence was seen immediately on the court. Appearing in all 31 games during the 2010-2011 season, including 28 starts, Malinowski led the Saints in scoring (16 points per game) and assists (3.5 assists per game). Malinowski’s biggest performance as a sophomore came when she scored a season-high 27 points while collecting 6 rebounds against Cornerstone University.

During the 2011-2012 season, Malinowski played an instrumental role in helping lead the Saints to their program best 10 win season which included the first ever Chicagoland Collegiate Athletic Conference (CCAC) play-off win over Judson University. In the game, Malinowski scored a game-high 24 points on 7-13 shooting. At the conclusion of the season, Malinowski was named to the 2012 CCAC All-Conference 1st team. She finished the season averaging 13 points per game, 4.4 assists per game (career best), and 2.6 steals per game (career best).

Eight games into her senior season, her role with the team has continued to be established as one of the team’s greatest leaders. On November 2nd, 2012, Malinowski hit the game winning shot for the Saints in an 83-82 thriller at McKenna Arena.

Second year head coach, Aimee Niespodziany, has seen her starting point guard grow up in the time she’s coached her. “Lauren is the leader of our team as the starting point guard,” said Niespodziany. “Her knowledge of the game has grown so much since I’ve been here, and she’s been so instrumental to the success we’ve been able to have together.” “She’s an incredible girl who really puts 100% effort into everything she does,” continued Niespodziany. “She wants so badly for the team to be successful and it definitely rubs off on the entire team. It has been a real pleasure to coach her and watch her grow as an individual. I look forward to seeing what the rest of the season brings for her and the team.” Malinowski’s 15 point performance on Saturday put her into Saints history as only the second player to eclipse the 1,000 point milestone. Sitting at 1,001 career points, Lauren is second all-time in scoring for the Saints women’s basketball program trailing only teammate Lindsey Steffen (Nappanee, Ind.) who recorded her 1,000th point in a win over Goshen College earlier this season.

Thus far in the 2012-2013 season, Lauren is second in scoring at 11.6 points per game and leads the team in three-point field goal percentage hitting 39.2% of her shots beyond the arc.

You can see Lauren and the rest of the Saints team hit the floor at McKenna Arena on Saturday, December 1st at 1:00 p.m. (EST) as they take on Calumet College of St. Joseph.