You are here: Home / Community / Tennessee Couple Share 15 Reasons for Moving to Dearborn

DEARBORN, Michigan – Jane and Phil Button, new residents at Oakwood Common in Dearborn, are already prepared to answer neighbors’ questions about why they recently moved from Tennessee to Michigan. There are more than 15 precious reasons, including children, grandchildren, and great grandchildren.

The Buttons, Illinois natives, had lived in Memphis for the past several years. The couple’s four children all live in different states. They admit it was their Michigan daughter, a nurse, who encouraged them to be near her large family in metro Detroit and helped them get settled in their new home. 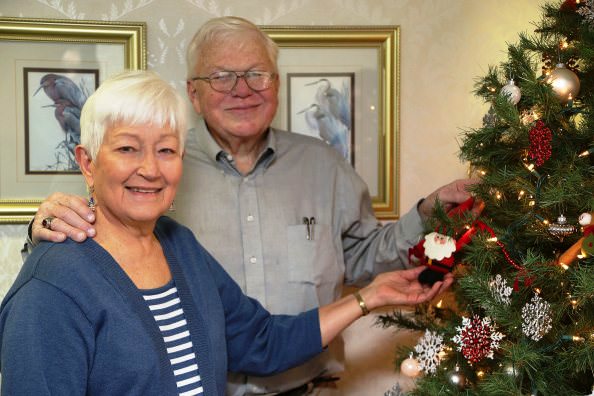 Before moving the active couple did their research about retirement communities and opportunities for work and volunteering.

“I did a lot of searching on the Internet, and our children toured places for us,” said Phil Button.  “None could hold a candle to Oakwood Common.”

Button, who has a Doctor of Ministry in Public Health and Faith, served for several years as a prison chaplain in Illinois and more recently as a hospice chaplain, has already inquired about volunteering as a chaplain at Oakwood Hospital.  He and his wife, who also taught in the Illinois prison system, are educators as well.

“I loved my students,” said Jane Button.  Although she has not revealed any plans to teach in Michigan, her husband is already planning to teach at a local university.

Phil Button authored the book, “Sabbath Living,” that was published in 2005 about his theology and work as a chaplain in the prison system for 18 years.

“My wife and I have found that if something isn’t meant to be, there will be obstacles put in front of us,” added Button.  “In moving to Oakwood Common, there were no obstacles.  Coming here is ‘a gift from God’.”

Preparing to celebrate their 54th wedding anniversary this month, the Buttons are looking forward to the holidays.

According to the couple, this year is going to be the best Christmas ever. They were able to have the kids and grandkids take a lot of furniture, household items and Phil’s collection of tools from their home in Memphis. It helped to make their move much easier.

Because the Buttons are renting their house in Tennessee, they chose Oakwood Common’s monthly rental option which gives them greater financial flexibility.Their daughters from Michigan and Pennsylvania helped them unpack, organize, decorate and get the computers going in the new apartment. Now, that Phil has hung their pictures and they’ve decorated for Christmas, the couple has declared that they have no plans to move again.

Oakwood Common offers one and two bedroom apartments located at 16351 Rotunda Drive, within a beautiful 29-acre retirement community that includes exquisite landscaping, nature trails and scenic views along the historic Rouge River Gateway in Dearborn.  Oakwood Common apartments, available with flexible payment options, offer exceptional amenities for independent living and can be readily customized.  Assisted living and a comprehensive rehabilitation and skilled nursing center are also available for those with additional needs.  For more information and to arrange tours, call 800-642-4663 or visit www.OakwoodCommon.org.