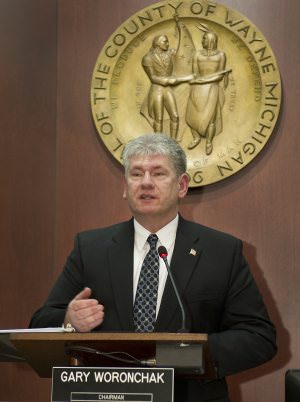 Woronchak, D-Dearborn, was elected at the commission’s organizational meeting last Thursday to a second term as chair. The 15 members of the Wayne County Commission elect a chair from among themselves at the beginning of each two-year term of office.

As chairman, Woronchak is responsible for the commission’s $9.6 million budget and its employees, as well as scheduling and presiding over meetings and appointing members to standing committees and special task forces.

Woronchak, 57, is beginning his fifth term on the commission, representing Dearborn and Allen Park in the commission’s 13th District. Prior to being elected to the commission in 2004, he served three terms in the state House of Representatives. Before government service, he worked more than 20 years as a news editor for the Dearborn Press and Guide.

In remarks to commissioners after being re-elected chairman, Woronchak said the commission’s top priority in the new term is fixing county government’s fiscal problems, which include an accumulated deficit of $160 million and continued overspending despite the county having lost tens of millions of dollars in tax revenue due to property values falling in recent years.

“We can’t continue on the path we’ve been on,” Woronchak said. “We can’t have anyone thinking there is money hidden somewhere, and that overspending doesn’t matter or will be tolerated.

“We can’t have elected officials not taking to each other, or suing each other, we need all of us to come together to adjust Wayne County to the new fiscal reality.

“We owe it to the people of Wayne County to get our fiscal house in order – finally, and once and for all,” Woronchak said.

Woronchak also referred to events of the past two years that have shaken the public’s confidence in county government, including appointees of the administration being arrested and an FBI investigation into county contracts.

“We need to restore our citizens’ faith and trust in Wayne County government,” he said. “The past two years were unlike any we could have imagined and we need to be mindful that the public is expecting, and deserves better.”

The Wayne County Commission is the legislative branch of county government, responsible for approving contracts, enacting ordinances and oversight of the $2 billion county budget.