DEARBORN, Michigan – Kevin Hart, a senior at Divine Child High School, was awarded the $5,000 Harry A. Sisson Memorial Scholarship during the Rotary Club of Dearborn annual Youth Month.  Criteria for winning the Sisson Scholarship include exemplifying the Rotary service ideals, along with high academic achievement, leadership among peers, and demonstration of the highest ethical standards.  The award was presented to Hart by Ray Trudeau,Dearborn’s Rotarian of the Year. 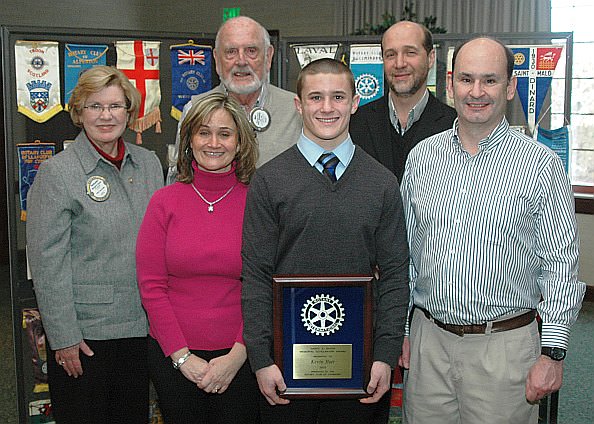 Kevin Hart, Divine Child High School senior and 2013 recipient of the Harry A. Sisson Memorial Scholarship, displays the award with his parents Robert and Jennifer Hart who attended the presentation. At rear, from left, are Rotarians Margaret Blohm, chairperson of Selection Committee, Rotarian of the Year Ray Trudeau, and Hassen Hammoud, Rotary Club President.

The Dearborn Rotary Club, through the Dearborn Rotary Foundation, awards this annual $5,000 college scholarship, which is made possible through an endowment provided by the Harry A. Sisson Foundation.  The Harry A. Sisson Memorial College Scholarship Award is presented in recognition of an Outstanding Senior attending a public or private high school inDearborn.  Mr. Sisson became a Rotarian in 1917 and patterned his life after the principles of Rotary’s motto “Service above Self.”

Scholarship candidates are nominated and endorsed by the student’s high school principal and academic advisor for specific community service and leadership accomplishments.  The Dearborn Rotary Sisson Scholarship Committee reviewed 22 extensive applications and personally interviewed six finalists.  All of the candidates demonstrated the highest of academic and leadership qualifications.  The scholarship has been awarded annually for the past 24 years.

In addition to maintaining high academic standards, Hart is president of Divine Child’s Student Council Executive Board and captain of the wrestling team.  He helped to restructure Homecoming to remove the “date dance” stigma with a “Super Heroes” theme—making it easier for students to attend the dance by themselves or with a group of friends.  He also helped to organize a fundraiser that collected more than $3,000 for the Wounded Warrior project.  A Dearborn Animal Shelter volunteer, Hart is a member of the “Pit Crew” teaching shelter dogs, especially pit bulls—proper cage behavior to help them receive a loving home.

Hart shared that his career goal is to become an electrical engineer and has already been accepted to attend Notre Dame and is awaiting response from MIT and Harvard. Upon receiving the scholarship award, Hart gave a short speech and said, “It is just not a gift of money, it is a gift of time. People can earn more money, but they can’t earn more time in their life, so the award is especially important”.

Rotary is the world’s first service organization, which was founded by Paul P. Harris in 1905 in Chicago, Illinois. The name Rotary is derived from the early practice of rotating meetings among members’ offices.  Today, Rotary has evolved into an international service organization of 1.2 million business and professional leaders in 33,000 clubs worldwide.  The Rotary Club of Dearborn is one of 51 clubs in Rotary District 6400 which includes Wayne, Monroe and Lenawee counties in Michigan and Essex County in Ontario.  Dearborn Rotary meets weekly at Park Place in Dearborn. For additional information, visit www.dearbornrotary.org  or call 313-278-7233.