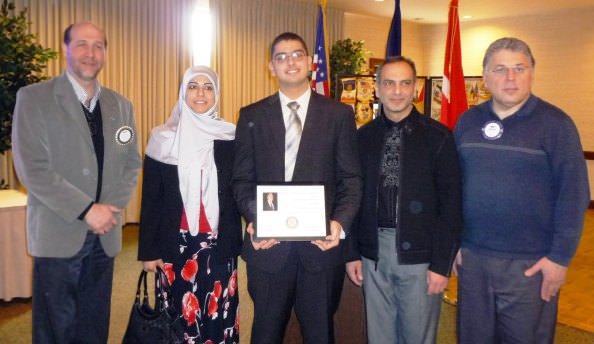 Hugh Archer, a longtime Rotarian and Dearborn resident who passed away in 2005 at the age of 91, was a registered professional engineer whose many achievements included inventor, scientist, entrepreneur, banker, businessman, attorney, ham radio operator, sportsman, and humanitarian. He was a Dearborn Rotarian for 54 years, held several leadership positions in Rotary, and served as president of Rotary International, the world’s largest service organization with more than 1.2 million members.  In addition to his Rotary service, Archer was active locally with the YMCA, Boy Scouts of America, Dearborn Schools, and Henry Ford Hospital.

In addition to maintaining high academic standards, Ghandour accumulated more than 300 hours of volunteer service.  He shadowed a local physician for three years who tends to younger patients, and led friends in restoring HemlockPark.  His leadership roles include tennis team captain for two years, founder of the Science National Honor Society at Fordson, co-founder of Fordson Chemistry Club, four-year member of the Pre-Med Society and president for one year, and Key Club board member for three years.  Ghandour’s honors and awards include Class Salutatorian, attendance at the National Youth Forum of Medicine, and recipient of the Western Wayne Athletic Conference All Academic Award.  Reference letters described Ghandour as “honorable, respectful, social, resilient, and responsible young adult who believes education to be the key to success in life.”

Ghandour plans to study pre-medicine at University of Michigan – Ann Arbor.  After accepting the award, Mohamed thanked Hugh Archer, Dearborn Rotary Club, and his parents.  He described scholarship as “truly an honor for him”.

Rotary is the world’s first service organization, which was founded by Paul P. Harris in 1905 in Chicago, Illinois. The name Rotary is derived from the early practice of rotating meetings among members’ offices.  Today, Rotary has evolved into an international service organization of 1.2 million business and professional leaders in 33,000 clubs worldwide.  The Rotary Club of Dearborn is one of 51 clubs in Rotary District 6400 which includes Wayne, Monroe and Lenawee counties inMichigan and Essex County in Ontario.  Dearborn Rotary meets weekly at Park Place in Dearborn. For additional information, visit www.dearbornrotary.org  or call 313-278-7233.