DEARBORN, Michigan —  If a 1969 rocket attack in Vietnam couldn’t stop U.S. Army veteran William “Bill” Crowley, he’s determined that a fall down the basement steps of his Allen Park residence this past spring won’t either.

Today, Crowley is enjoying his temporary apartment at Oakwood Common as he gets stronger before returning home.  Hospitalized after his fall and then transferred to a nursing facility, Crowley described how he became very restless and asked to move. 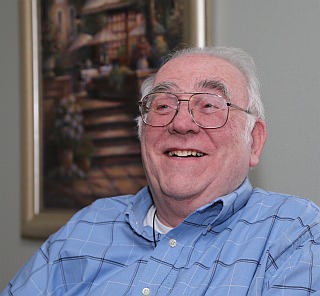 “Being at Oakwood Common is like wearing a nice comfortable sweater,” said Crowley, who enjoys visiting the community’s Bistro each morning as well as sharing a large repertoire of Irish jokes. “I don’t feel restricted at all.”

Crowley recalls his long recovery that began in February 1969 after he was hit in the head by a shell fragment during a rocket attack in Vietnam. It occurred only 46 days after his Army tour began just days before Christmas 1968.  The attack left him comatose for a month and permanently disabled.

Nonetheless, Crowley earned a Bachelor of Arts degree in psychology from the University of Michigan-Dearborn and later a Master’s degree in guidance and counseling from Eastern Michigan University.

Known to break out in song in troubadour style with one of his Oakwood Common neighbors, Crowley enjoys listening to his extensive collection of classical music.

He also has a rolodex memory for dates, especially the birthdays of friends and family members who are invited to visit and join him in the Bistro for ice cream.

While living in one of Oakwood Common’s temporary apartments, Crowley receives additional assistance to meet his personal care needs.

According to Mary Granata, director of sales for Oakwood Common, the community’s temporary apartments, also known as respite care, are available as a temporary home for individuals who need up to 24-hours of care while their caregivers are traveling or unable to assist.

When told of Mr. Crowley’s analogy of Oakwood Common being a nice comfortable sweater, Granata smiled and jokingly replied, “It’s because he fit in like a comfortable shoe.”

Oakwood Common offers one and two bedroom senior living apartments located at 16351 Rotunda Drive, within a beautiful 29-acre community that includes exquisite landscaping, nature trails and scenic views along the historic Rouge River Gateway in Dearborn.  Oakwood Common apartments, available with flexible payment options, offer exceptional amenities for independent living and can be readily customized.  Assisted living and a comprehensive rehabilitation and skilled nursing center are also available for those with additional needs.  For more information and to arrange tours, call 800-642-4663 or visit www.OakwoodCommon.org.