DEARBORN, Michigan – The public is invited to attend the inauguration ceremony at 7 p.m. on Thursday, Jan. 2 for the City of Dearborn elected officials who will serve January 2014 through December 2017.

The ceremony will be inside the Michael A. Guido Theater at the Ford Community and Performing Arts Center, 15801 Michigan Ave. 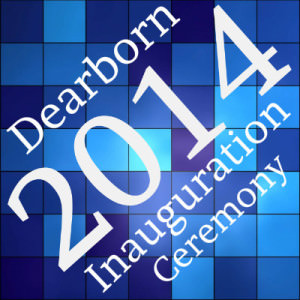 A dessert reception will follow in the lobby hosted by the Dearborn Community Fund through generous contributions from sponsors. Called a “Celebration of Community,” the reception will feature music from the Henry Ford Community College Jazz Trio.

They will be sworn-in by Michigan Supreme Court Justice Brian Zahra.

The master of ceremonies will be Debbie Dingell, president of D2 strategies and chair of the Wayne State University Board of Governors.

Ray Wantuck, the 2013 Veteran of the Year, will lead the crowd in the Pledge of Allegiance; and the Dearborn Police and Fire Honor Guard will participate along with local clergy.

For more information, please call the Department of Public Information at 313-943-2285.