DEARBORN, MI – The friends and family of the Honorable Kaye Tertzag will host the Fifth Annual Tertzag Tribute Dinner on Thursday, February 27, 2014. Judge Tertzag passed away on February 4, 2009, having established a great legacy of integrity and service to the State of Michigan, as well as a great example of love and devotion to his family and legion of friends.

To preserve and honor his memory, the Fifth Annual Tertzag Tribute Dinner will be held at the Park Place Banquet Hall in Dearborn from5:30 p.m. to 9:30 p.m.  Park Place is located at the corner of Park and Outer Drive, just south of Michigan Avenue.  Tickets are $40.00 and include dinner and an open bar. 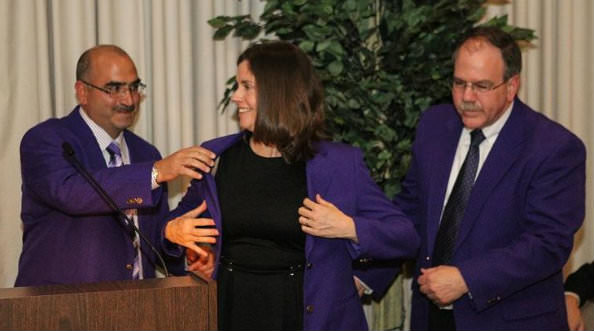 The Tertzag Tribute Dinner Committee is pleased to announce that the 2014 recipient of the Purple Sport Coat Award is attorney Anthony S. Guerriero.  Michigan Supreme Court Justice Bridget McCormack, last year’s recipient, will present the award.  Guerriero and Judge Tertzag were dear friends for decades.  Tony worked on the assembly line at Ford Motor Company Truck Plant while studying for his Bachelor’s Degree. He earned his Juris Doctor from Wayne State University Law School in 1979.  He is married to Elizabeth and they are the proud parents of daughter Gina.  He currently owns his own practice, Anthony S. Guerriero, Attorney at Law, in Allen Park.

Tony has served as a prosecutor, criminal defense attorney, civil litigator, mediator, arbitrator, receiver, magistrate, and judge.  Tony has demonstrated a commitment to his community as an active member of the Dearborn Exchange Club, Amicus Club of Dearborn, the Dearborn Italian American Fraternal Club, and the Knights of Columbus.  Guerriero spoke at Judge Tertzag’s memorial, and is honored to receive the award.  Guerriero exemplifies Judge Tertzag’s motto:  Be Prompt. Be Prepared. Be Polite.

The committee is honored to have Debbie Dingell as keynote speaker.  Debbie is currently the President of D2 Strategies and the Chair of the Manufacturing Initiative, American Automotive Policy Council.  She is an active civic and community leader in both Michigan and Washington, D.C. She recently completed a more than 30-year career at General Motors as a senior executive, where she was the President of the GM Foundation and headed public affairs.  Ms. Dingell is also a national Democratic strategist, and a member of the Democratic National Committee.  We are excited to hear her message.

The Committee will also make a special presentation to honor the late James L. Borin, of Garan, Lucow, Miller.  Jim was recognized, for more than a generation, as Michigan’s leading expert on the state’s No-Fault Law.  He served as a professor and lecturer at the University of Detroit Mercy’s law school, Thomas M. Cooley Law School, the Michigan Judicial Institute, and Lawrence Technological University.  Among many honors, he received the 2012 Earl Cline Award for Excellence in Negligence Law from the State Bar of Michigan’s Negligence Section.

“We will end the evening by continuing the tradition of the Sambuca toast,” said  Kara Tertzag Lividini.  “Attendees are encouraged to wear purple to the event.  Those wearing purple will be entered into a drawing for a door prize.”

Checks should be made payable to: Tertzag Tribute Dinner, LLC and sent to 412 Berwyn, Birmingham, MI 48009. Spouses and/or significant others are welcome.  This event will sell out and space is limited, so please buy your tickets now. Please direct questions to Kara Tertzag Lividini at 313.645.9511 or [email protected]gmail.com.

This is not a political fundraiser.