You are here: Home / Community / 100 Year Old Resident Enjoys Her Retirement in Dearborn

DEARBORN, MI – Eighteen years ago when Margaret “Peggy” Belloff announced to her daughters that she was moving to Oakwood Common in Dearborn, they were taken by surprise.  They didn’t realize that she had enlisted friends to help her find the Dearborn retirement community and had requested to be put on the waiting list.

When the call came through that an apartment was available, Belloff finally shared her plans with daughter Barbara Markus who lived in Grosse Pointe, Mich., and daughter Nancy Prevost who lived in Minnesota.

“Our mother spent most of her life in a small town outside Pittsburgh and only moved to Michigan to be near family after my husband took a job in Detroit,” said Markus. “Before she moved to Dearborn, she lived in three different flats in Grosse Pointe.” 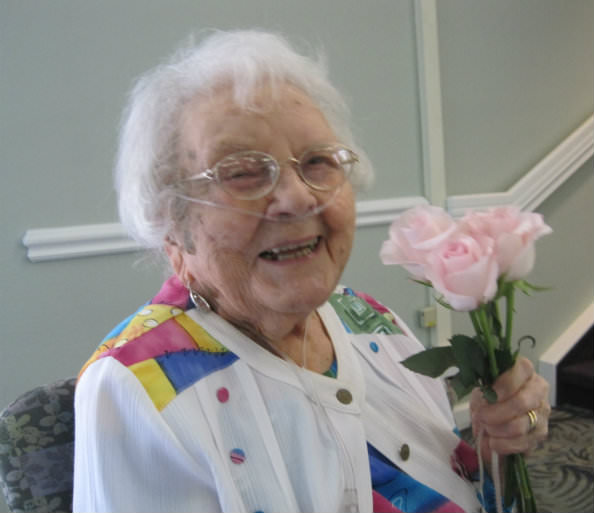 Margaret “Peggy” Belloff at her 100th birthday celebration in November 2013.

Markus added that after their mother moved to Oakwood Common, family members practically needed an appointment to visit because she became involved in so many activities including exercise, travel and taking charge of the library.

Belloff’s daughters, who are now enjoying their retirement, live out of state.  Markus and her husband live in Florida while Prevost lives in Arizona.  In November, family members and friends gathered to help Belloff celebrate her 100th birthday.

It was only weeks later that the daughters returned to Michigan after Belloff announced she was ready to move from her Independent Living apartment to an apartment in the community’s Assisted Living area.

Although her daughters had suggested to her that she receive more assistance, it wasn’t until a trip to the hospital in December and a subsequent stay in respite care in Oakwood Common’s Assisted Living area that Belloff made her decision to move.

“She enjoyed having three meals a day in the nearby dining room, and she gained her strength back quickly,” said Prevost. “She also talked about how much she loves the staff.”

“Within a day after we came to help her make the move, 90 percent of her furniture and artwork were already in her new apartment,” added Prevost.  “Oakwood Common’s staff helped with everything, including finding the movers, which can be difficult to arrange over the holidays.”

While helping Belloff get settled in her new residence, the daughters stayed in one of Oakwood Common’s guest apartments and enjoyed visiting residents in the Bistro café.

Belloff’s daughters are no longer surprised at her independence and ease of adjusting to a new residence, which gives them comfort and peace of mind returning to their homes in Florida and Arizona.

“We talk with her every day by phone,” said Markus.  “She loves to read and has her books on tape, wonderful staff to assist her, another longtime resident she enjoys dining with, and a home that gives her the independence she values.”

Oakwood Common offers one and two bedroom senior living apartments located at 16351 Rotunda Drive, within a beautiful 29-acre community that includes exquisite landscaping, nature trails and scenic views along the historic Rouge River Gateway in Dearborn.  Oakwood Common apartments, available with flexible payment options, offer exceptional amenities for independent living and can be readily customized.  Assisted living and a comprehensive rehabilitation and skilled nursing center are also available for those with additional needs.  For more information and to arrange tours, call 800-642-4663 or visit www.OakwoodCommon.org.