DEARBORN, MI – “We’ve always done things together,” said Eugene Smith, when asked about the secret to his happy marriage with wife Clara and their 71 years of Valentine’s Day celebrations.

The Smiths’ marked their 71st wedding anniversary on January 31, only a few days before Valentine’s. Unlike their 50th anniversary celebration which included a trip to China, this year the Dearborn couple shared cake with their friends and neighbors at Oakwood Common. 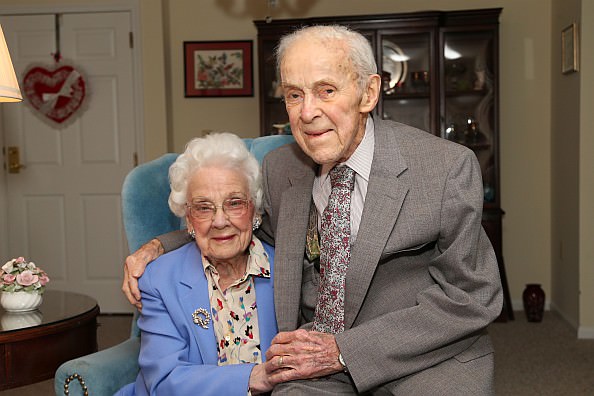 Clara and Eugene Smith in their residence at Oakwood Common in Dearborn, MI

“I made sure we had a two-tiered cake, because my wife ordered two tiers for our wedding day, and the baker only delivered a sheet cake,” said Smith. “I’ll always remember how disappointed she was, and I want her to be happy.”

Sharing her thoughts about their years together, Clara Smith said, “I don’t know if there are any secrets to our marriage. It’s all about give and take. You try your best to get along together.”

The couple first met when they were only nine years old and attended the same church in Columbus, Ohio. “It wasn’t until I was in the Army and graduated from Officer’s Candidate School that I could afford to marry her,” said Smith. “It was during World War II, and I was on leave. They opened up the registrar’s office on a Saturday so we could get a marriage license.”

The Smiths’ marriage began the first of many travels the couple made together. Because of Eugene’s education and teaching experience in math, the Army sent him to advanced training schools throughout the United States. Clara was able to accompany him on all his assignments except the Philippine Islands where he spent eight months teaching at the United States Armed Forces Institute.

More than 50 years ago, Eugene Smith joined Wayne State University as a professor of math education, and their family settled in a house near Oakwood Hospital. Today, the couple’s son Eugene Lynn Smith is an attorney in Dearborn, living nearby. The Smiths also have two grandchildren and three great grandchildren.

Having traveled over the years to every continent except Antarctica, the Smiths are now content to stay closer to home and keep busy with a variety of social and fitness activities at Oakwood Common.

Eugene is prepared for Valentine’s Day and with a mischievous smile added, “I’ve already ordered a box of chocolates for Clara, because she is a ‘chocoholic’.”

Clara agreed and never revealed how many boxes of chocolates Eugene has given her over their 71 Valentine’s together.