You are here: Home / Editorial / Apology From the Boy Who Cried Wolf (an Editorial)

Do you remember the story about the boy who cried wolf? Teachers have often used the fable as “a cautionary tale about telling the truth”. The old Aesops fable is about a boy in a village who tricked local villagers into thinking a wolf was loose in the village. The original story dates back prior to the 15th century.

“The tale concerns a shepherd boy who repeatedly tricks nearby villagers into thinking a wolf is attacking his flock. When one actually does appear and the boy again calls for help, the villagers do not come — thinking that it is another false alarm and the sheep are eaten by the wolf.”  (quotation from Wikipedia)

Yesterday, we published a story about The Henry Ford – Hosting the Kickoff Event for The Big Read on March 8th. Very few people read the story. (We are always careful to observe what headlines readers are clicking on.) So we promoted the story on our Facebook page with a different headline and tried a similar headline in our eNews blast on Friday morning.

Suddenly thousands of people were reading the story they had previously ignored.  Our desire was to draw attention to something great happening in Dearborn: children, teenagers, and families reading “The Call of the Wild” together.  That’s a great story. But when we “cried wolf” (and used a picture of a wolf) — it kind of backfired. We should have known better.

Many people thought it was a humorous and creative way to draw attention to the DEARBORN BIG READ (and “The Call of the Wild” story).

In fact, the Dearborn Public Library favorited one of our tweets about it.

One reader commented: “I’m sorry but this headline had me cracking up ‘RUMOR says it killed 3 Canadian Cops’ soooo let’s say it did…..out of 3 cops none of them had guns drawn? Yah right!” Another remarked: “What were Canadian cops doing in Dearborn?” Another said: “Cute use of fake headline!”

However, one person complained and said they thought the Dearborn Free Press was being  irresponsible, stating: “People may believe that there is a dangerous animal that is a threat to them.”

Here (below) is a clip from our eMail news alert of Friday morning: 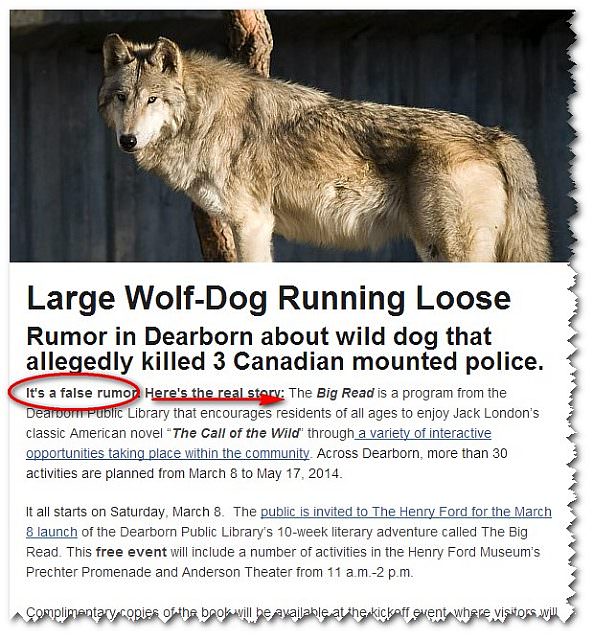 The problem is that many people only scan the headlines and look at the photos. They never read the details or study the real issues.

We have never seen any stray wolf-dogs running loose in Dearborn. We thought we made it very clear that it was a false rumor. The headline (above) was never published in the Dearborn Free Press, but was used in an email blast to test response with a catchier headline, and appeared in the tweet mentioned above.

I apologize. Please forgive me.

So, to make it clear:  There are no wild wolf-dogs running loose in Dearborn.  It wasn’t a true story. It’s only fiction. It didn’t happen in Dearborn, and it wasn’t in Canada.  (It happened in Alaska or the Yukon Territory.) It wasn’t yesterday. It was over 100 years ago. Three Canadian mounted police were not killed, but some Native Americans might have been killed.  You’ll have to read the whole story to discover what really happened.

The allusion to a wild wolf-dog is from the story “Call of the Wild” by Jack London, which is the featured book, during Dearborn’s Big Read celebration. 10,000 free copies of the book will be distributed in Dearborn, in the coming weeks. So in a very metaphorical way, there will be 10,000 dogs running loose.  Here’s the allusion to a “wild wolf-dog”  named Buck (that I was thinking of) — and I quote from the Call of the Wild:

“The blood-longing became stronger than ever before. He was a killer, a thing that preyed, living on the things that lived, unaided, alone, by virtue of his own strength and prowess, surviving triumphantly in a hostile environment where only the strong survived. Because of all this he became possessed of a great pride in himself, which communicated itself like a contagion to his physical being. It advertised itself in all his movements, was apparent in the play of every muscle, spoke plainly as speech in the way he carried himself, and made his glorious furry coat if anything more glorious. But for the stray brown on his muzzle and above his eyes, and for the splash of white hair that ran midmost down his chest, he might well have been mistaken for a gigantic wolf, larger than the largest of the breed. From his St. Bernard father he had inherited size and weight, but it was his shepherd mother who had given shape to that size and weight. His muzzle was the long wolf muzzle, save that was larger than the muzzle of any wolf; and his head, somewhat broader, was the wolf head on a massive scale.”

“His cunning was wolf cunning, and wild cunning; his intelligence, shepherd intelligence and St. Bernard intelligence; and all this, plus an experience gained in the fiercest of schools, made him as formidable a creature as any that intelligence roamed the wild. A carnivorous animal living on a straight meat diet, he was in full flower, at the high tide of his life, over-spilling with vigor and virility. When Thornton passed a caressing hand along his back, a snapping and crackling followed the hand, each hair discharging its pent magnetism at the contact. Every part, brain and body, nerve tissue and fibre, was keyed to the most exquisite pitch; and between all the parts there was a perfect equilibrium or adjustment. To sights and sounds and events which required action, he responded with lightning-like rapidity. Quickly as a husky dog could leap to defend from attack or to attack, he could leap twice as quickly.”

“Never was there such a dog,” said John Thornton one day, as the partners watched Buck marching out of camp.

Another concerned community member wrote an email explaining why some people might over-react or be genuinely concerned about a headline concerning a wild “wolf-dog”:

None of that was on my radar when I published the press release about the Big Read in Dearborn.

The Issues Behind the Issue

So what are the real issues behind the issue? Apathy and illiteracy. Together, they form a deadly combination that cripples communities — far more dangerous than stray animals with rabies.  If you made it this far (reading this long editorial) – you are not suffering from either malady. You are part of the solution.

I apologize again for using the “wild wolf-dog link bait”. I was the boy who cried wolf, and I’m sorry. It was not professional, and we can do better.  Please keep reading.