DEARBORN, MI –  The Board of Directors of Henry Ford Community College (HFCC) Foundation recently honored former board member Fred Secrest as Director Emeritus. The special recognition was presented at a Foundation reception held in his honor.

“Mr. Secrest’s more than 10 years of dedicated volunteer service to the Henry Ford Community College Foundation following his retirement from Ford Motor Company are worthy of this recognition,” said Judith Costigan, HFCC Foundation’s board chair. Secrest joins Edsel Ford II as one of only two individuals and former board directors to receive this honor from the HFCC Foundation. 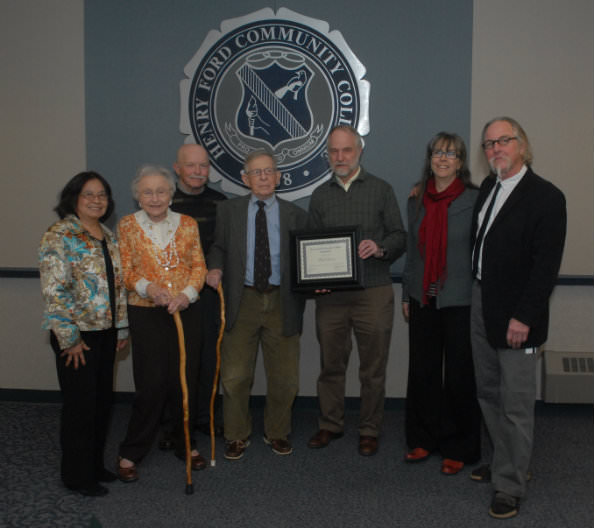 In 2007, Secrest also received HFCC’s Distinguished Service Award to honor those who have made significant contributions toward excellence in education, and particularly to Henry Ford Community College.  He received the award for his outstanding civic and business accomplishments, and unwavering support of HFCC.

Secrest began his career with Ford Motor Company in 1948 after service as an officer in the United States Army during World War II.  Prior to his military services, he earned a bachelor’s of arts degree in Political Science from Ohio State University, and following his service earned a master’s degree from Harvard Business School, where he also became an instructor.

During Secrest’s 32-year tenure with Ford Motor Company, which began in the Finance Department, he served as Ford’s vice president controller for 12 years and was appointed executive vice president in 1973, with responsibilities that included Governmental Affairs, Advanced Research, and Environmental Safety and Engineering.

Following his retirement from Ford in 1980, Secrest volunteered his time and expertise to higher education with service and contributions to Michigan Technological University, Alma College and HFCC.

Upon receiving recognition as Director Emeritus for the HFCC Foundation, Secrest recalled that as a board member, providing advice that could potentially help the College was one of the many responsibilities he enjoyed.

Today, Secrest resides at Henry Ford Village with his wife Stephanie.  They will celebrate their 70th anniversary this year.  They are parents of five children, four grandchildren and four great grandchildren.  Several family members, including William Secrest who is chair of HFCC’s World Religion Department, joined the couple at the HFCC Foundation reception.

The mission of the HFCC Foundation is to raise charitable support for Henry Ford Community College by building long term relationships with such constituents as business, civic and community leaders; alumni; corporate and philanthropic foundations; and individuals of influence and affluence, in support of the goals and objectives of the College and the educational and career aspirations of HFCC students. For more information about the HFCC Foundation and opportunities to donate, visit www.hfcc.edu/foundation or call 313-845-9620

Henry Ford Community College (HFCC) in Dearborn, Mich., is a comprehensive public community college serving 18,000 students each year in southeast Michigan.  HFCC is dedicated to preparing students for a rapidly changing world and workplace by offering more than 100 associate’s degree, career and university transfer programs.  HFCC also specializes in customized workforce development training for business and industry. Since its founding in 1938, HFCC has been the gateway to higher education for thousands of students who seek affordable, high-quality post-secondary education. To learn more about Henry Ford Community College, please visit the website or connect via social media (Facebook, Twitter, LinkedIn, and YouTube). You may also call 1.800.585.HFCC (4322).